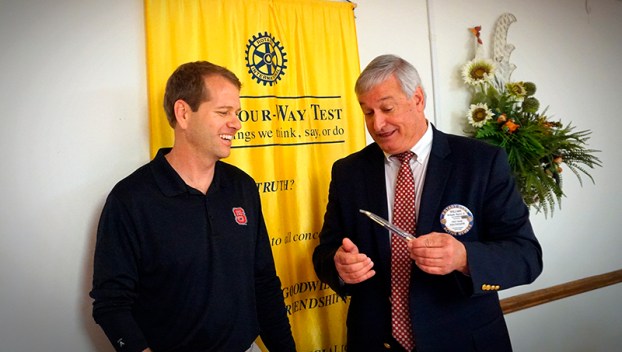 Walter (Walt) B. Gerard IV was presented as guest speaker at Washington (noon) Rotary on Monday by Rotary member William Taylor. William introduced Gerard, noting he was a three-year starter as free safety at Washington High School under Coach Bob Hanna, a captain, receiving such recognitions as defensive MVP, Kugler Leadership, All Area and All Conference selections, and WDN Scholar Athlete. He attended North Carolina State University, where he was a walk on, earning a full-time spot on special teams in addition to a football scholarship. Having played in four collegiate bowl games under coach Dick Sheridan, he was a Bo Rein award recipient two years in a row, awarded special team MVP honor, as a well as a scholar athlete. He was chosen as special teams player of the week in games versus UNC-CH, Duke, Virginia and Wake Forest.

Walt shared with the club his journey in joining the team, noting the endorsement of his coach in high school was an important factor. He shared the history behind the diamond logo on the helmets, and the deep commitment required by a player to represent The Wolfpack. He described some of the complexities of different defensive schemes at the collegiate level, particularly at the defensive backs and safety positions, noting wins and losses often come down to seconds and inches. He credited commitment and conditioning, as well a close relationship with family, friends, coaches and foremost God, as keys to his success on and off the football field. Having received a business degree from N.C. State, he was blessed to return home, where he and his father, Bubba Gerard, built a very successful seed and grain business, serving growers in eastern North Carolina.

Walt was presented the highly coveted Rotary Speaker Pen for his high energy and interesting overview of his journey to and time as a starting Wolf Pack football player.

Washington (noon) Rotary consists of volunteers within Beaufort County dedicating their efforts to charitable causes both locally and those to which its parent organization subscribes.

Each year, this local group has raised and disbursed funds to local nonprofits through creative fundraising activities.