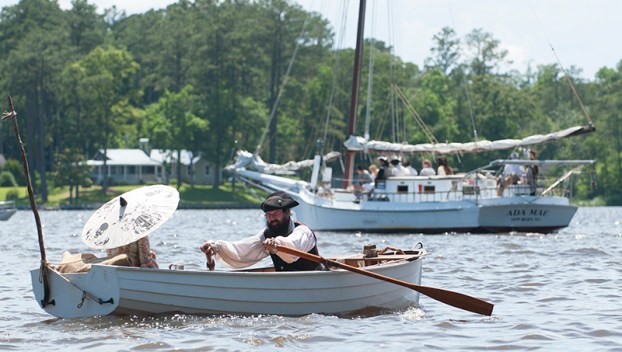 BATH — Bath Fest returns this weekend, this time with a celebration of the Golden Age of Piracy.

The event is one of several planned this year to commemorate the 300th anniversary of the pirate Blackbeard’s death at Ocracoke Island. The festival is set for Saturday at Bonner’s Point from 10 a.m. until 3 p.m. and includes living history performances by the Loose Cannon Company, also known as “pirates for hire.”

“They do live interpretation of the Golden Age of Piracy. That defines a time period where rogues like Blackbeard, Stede Bonnet, that’s the time period where they were active,” said Phoebe Wahab, one of Bath Fest’s organizers.

Wahab said the troupe interacts with its audience, in addition to demonstrating how to shoot a cannon and the use of black powder, the fuel for the earliest firearms.

“It’s hands-on learning,” Wahab said. “Their interpreters work really well with children. … That’s what gets people’s attention, builds memories, makes them learn more. They pride themselves with their interaction with the public.”

Many past Bath Fest vendors will return this year; their requirements is that the arts and crafts for sale are all handmade. Yard art, pet treats, pottery, jewelry, suncatchers, windchimes, driftwood fish, local honey and stainless steel firepits are just some of the offerings for sale at the festival, according to Wahab.

Also scheduled are: a weaving and spinning demonstration by Mattie Arts Center artist Pat Bertke; bake sales and other food sales by Bath Ruritan Club, Knights of Columbus and the Girl Scouts; Bath Elementary School’s art show and local entertainment. Just a few blocks away in the new exhibit hall at the old Bath High School, artifacts recovered from Blackbeard’s flagship, Queen Anne’s Revenge, are on display. The traveling exhibit moves on at the end of the month and is free to the public.

Wahab said Bath Fest is a rain or shine event.

“Obviously, we’re watching the weather, as everybody is, but what they’re calling for is intermittent rain, so we’re planning on going on as normal,” Wahab said.