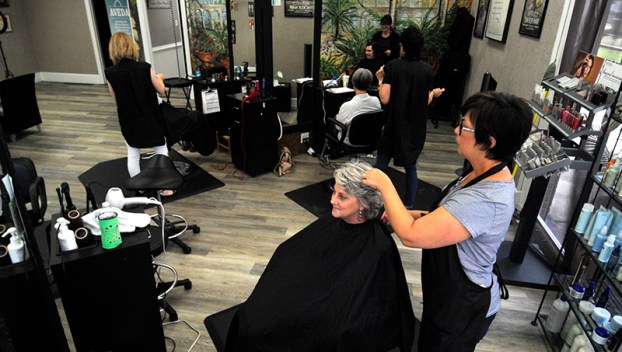 HARD AT WORK: As a salon, Capelli stylists agreed to donate 10 percent of the business’ service sales to Sound Rivers during April. Along with donation pledges from clients, the salon was able to donate $2,758 to the nonprofit. (Matt Debnam/Daily News)

Bringing together a private business and a local nonprofit, Capelli Salon was able to give the nonprofit Sound Rivers a shot in the arm during April in celebration of Aveda Earth Month. As an Aveda salon, Capelli is encouraged each year to contribute to a nonprofit involved in clean water and environmental stewardship.

“What we decided to do as a salon was donate 10 percent of our service sales during the month of April,” said salon owner Lisa Gargaro. “We asked for pledges from clients to see if they wanted to participate and a lot of folks did donate.”

In addition to Capelli, Aveda Salons in New Bern and Goldsboro also offered donations during the month of April, which were in turn matched, dollar for dollar, by a group of donors. All told, the organization took in more than $20,000 during April, exceeding its initial goal of $15,000.

“We’re certainly supportive of the local business community,” Sound Rivers Executive Director Heather Deck said. “It’s a reflection of the fact that all of us who live and work within the communities along the Neuse and the Tar-Pamlico rivers are working towards healthy and strong communities. There’s a commitment there that having clean rivers and a clean source of drinking water is one of the key pieces of having healthy and vibrant communities.”

Last year, during its first go-round participating in Earth Month, Capelli donated a total of $770 to Sound Rivers. In addition to its financial contributions to the organization, Capelli practices recycling and attempts to use the best environmental practices in its own business.

“I’ve always taken great pride in being active in the community,” Gargaro said. “I’ve always been that person who wants to give back.”