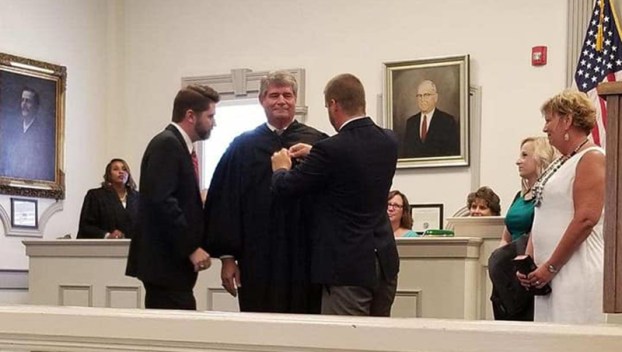 Judge Keith Mason was sworn in Friday and launched into the role on Tuesday, presiding over District Court in Plymouth.

“It gets real this week,” laughed Mason in an interview on Saturday.

In May, Mason was appointed by Gov. Roy Cooper in the district that covers Beaufort, Hyde, Martin, Tyrrell and Washington counties, replacing Chief District Court Judge Michael Paul, who retired in February.

Paul was among many who spoke at Mason’s swearing-in ceremony, held in the Superior Court courtroom at the Beaufort County courthouse. Superior Court Judge Wayland Sermons presided over the event, while Chief District Court Judge Regina Parker administered the oath of office. Reverends Danny Allen and Ken Hall of First United Methodist Church, where Mason and wife Elizabeth “Doogie” Hodges Mason have been longtime members, gave the invocation and scripture readings, and Hall spoke about the role of judges.

“He gave a very nice talk on the makings of a good judge,” Mason said.

“From my perspective it just could not have been any better,” Mason said, adding that he was touched when fellow attorney Windy Rose told him after the ceremony it was “inspiring and made her proud to be a lawyer. I thought that was the biggest compliment someone could give to me. That’s really all you can ask for is for someone to be inspired — and those were the things they talked about; the importance of good judges.”

Mason said he was fortunate to be able to draw on his 35 years as a lawyer, and the experience of people who’ve worked in the court system for many years, as well as the opportunity to shadow District Court Judge Chris McLendon, to help with his transition from bar to bench.

“I worked in the DA’s office for a little over eight years when I first got out of school and worked in the same courthouses, worked with a lot of the same people,” Mason said. “I really got a good feeling about things that were coming back to me — talking about cases, criminal law and procedure; another on conducting civil jury trials. It’s exactly the way I remember doing in criminal court. … There’s just a certain amount of detail you absorb just by being in the courtroom. It’s a multifaceted training process. Some of it’s long-term; some are intensive, short-term, but it’s ongoing. It’s a lifelong process.”