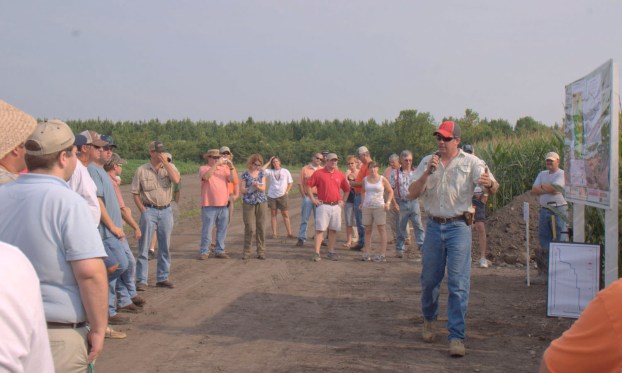 The 48th-annual Blackland Farm Managers Tour is set for Aug. 1 at 3B Farms and Foxfire Farms.

The event begins at 7 a.m. and is scheduled to conclude at 2 p.m. The hosts are James Russell, Doug Boyd and Todd Boyd. The even address is 2200 Respess Road, Pinetown. Registration runs from 7 a.m. to 8 a.m., when the programs begin. A catered lunch will be served at noon.

Dr. Fred Below, professor of plant physiology at the University of Illinois at Urbana-Champaign, is the featured speaker. His presentation is titled “Seven Wonders of the Corn Yield World.”

“This is the largest event of its kind in North Carolina, and we expect more than 500 attendees. Comprised of educational presentations from North Carolina State University Extension and Research faculty members on corn, soybean, cotton, and grain sorghum, it is also an excellent opportunity to interact with farmers and agribusiness leaders from across the state,” according to the Blacklands Farm Managers Association’s website.

The Blacklands Farm Managers Association was created in 1970 to help influential leaders, interested farmers and agribusiness representatives understand these issues and challenges,” according to the website. “When created, the objective of the Association was simply stated: to improve our understanding of management requirements needed to develop high organic souls to best utilize their potential.”
This year’s tour will focus on corn management and corn and soybean fertility. Presentations will be given by Dr. Ron Heiniger, Dr. Rachel Vann, Dr. Dominic Reisig, Dr. Wes Everman, Dr. Charlie Cahoon, Dr. Carl Crozier, Dr. David Hardy, Ryan Heiniger and several agricultural agents.
About 50 years ago, the panorama of northeastern North Carolina’s blacklands was changing. Small, individual farmers and large corporations were clearing land for farming operations. With all the farm acreage lost to housing, shopping centers, roads and airports at and near major cities along the Eastern Seaboard, northeast North Carolina became a logical place to provide acreage to replace the lost farming land elsewhere.
“The agri-business future looked bright for us,” reads the Blacklands Farm Managers Association’ website. “As promising as these coming changes were, they were not without fraught. Land and farm managers were faced with developmental techniques, soil nutrient deficiencies, weed and insect control, water management and a host of environmental issues.”
Beaufort, Carteret, Hyde, Tyrrell and Washington counties comprise the blacklands area.