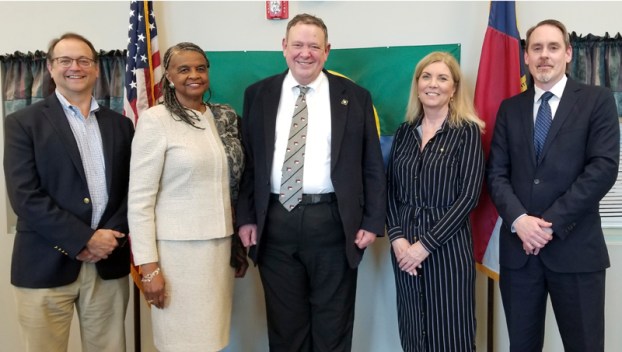 NEW BOARD: The upcoming special elections to fill the seat of the late Congressman Walter Jones Jr. were among the first items discussed newly sworn in Beaufort County Board of Elections on Tuesday. The board was recently expanded from three members to five following changes at the state level. Pictured are, from left to right, John Tate, Alice Sadler, Chairman Tom Payne, and new members Ranee Singleton and Jason Williams. (Matt Debnam/Daily News)

Filing is underway this week for special elections to fill the Congressional seat left vacant by the passing of U.S. Representative Walter Jones Jr.

At the Beaufort County Board of Elections, this could mean spending an additional $60,000 on elections this calendar year, and for BOE Director Kelly Hopkins, low voter turnout is a concern.

“The last special election we had for Congress was in 2016, and we had a very low turnout,” Hopkins said. “It ended up being 9.25-percent turnout.”

Filing for the election continues through Friday, and a wide field of Republican, Democratic and Libertarian candidates are throwing their hats into the ring, increasing the possibility that it may take three elections, rather than two, to decide the district’s next representative.

In 2016, a presidential year, turnout in Beaufort County during the March primaries was 39.1 percent. During the general election that same year, an energized electorate turned out in force, with 72.2 percent of Beaufort County voters casting a ballot.

Between those two high profile elections, however, was a third — a special primary election in June for the newly-redrawn U.S. House of Representative District 3. In Beaufort County, only 9.25 percent of voters participated in the election, 2,996 out of 32,348 registered.

As to why there is a special election to fill Jones’ seat, as opposed to an appointment by the state Republican Party, the U.S. Constitution, in Article I, Section 2, spells out the process for filling vacancies in the U.S. House of Representatives:

“When vacancies happen in the Representation from any State, the Executive Authority thereof shall issue Writs of Election to fill such Vacancies.”

In accordance with the Constitution, North Carolina Gov. Roy Cooper set the dates for the election last Monday.

While filing for the contest continues through Friday, the first primary for the congressional race is April 30, with absentee voting beginning March 15.

The next election will take place June 9, and based on the results of the April 30 contest, this will either be the general election or a second, runoff primary. Absentee voting for that election will begin May 24.

If a second primary is held June 9, the final, general election to select the next 3rd District Representative will be held Sept. 10.

In addition to these elections, Beaufort County will also hold its regular municipal elections in November.