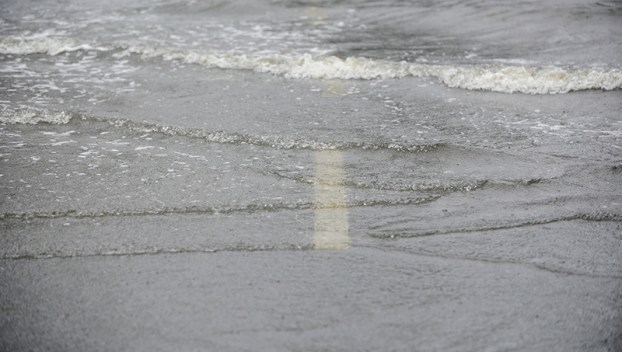 ON ITS WAY: Hurricane Dorian, a category 2 storm as of Tuesday night, is expected to expand as it travels north to brush the North Carolina coast. Tropical storm force winds, heavy rains and some storm surge are expected to arrive Thursday. (Ashley Vansant/Daily News)

Hurricane Dorian will gain speed and size, but diminish in strength as it moves up the East Coast. But authorities say it’s not the category that matters, it’s the track, the wind, the rainfall and storm surge that eastern North Carolinians should be paying attention to.

“We encourage everybody to look at all hazards. The general pointers that we’ve had is don’t pay attention to the category. It’s still going to be a hurricane — wind is going to be a hazard, water is statistically the biggest killer. Stronger winds, up to tropical storm force can certainly down trees and knock out power,” said Morgan Simms, a meteorologist at the National Weather Service, Newport/Morehead City office. “All hazards need to be paid attention to, definitely.”

Tuesday night, Hurricane Dorian had diminished from a powerhouse category 5 storm to a category 2, with sustained winds of 110 mph. By 11 a.m. Tuesday, NWS placed Beaufort County under a Hurricane Watch; by 5 p.m. Tuesday, a Hurricane Warning was extended up the southern North Carolina coastline to Jacksonville. Dorian’s effects will be felt in Beaufort County as early as Wednesday night, but its primary impact will happen through Thursday into Friday.

According to a Tuesday night webinar hosted by NWS, Newport/Morehead City Meteorologist-in-Charge David Glenn, Beaufort County is under “moderate” risk of flooding rainfall, with 6 to 8 inches of rain expected in the western part of the county between Wednesday and Friday. Eastern Beaufort county can expect 8 to 10 inches of rain, while isolated areas could receive as much as 15 inches.

NWS storm surge forecasts run from three to five feet for the sounds and rivers, but the locations those depths occur could vary widely, according to Newkirk.

Based on wind direction and the longevity of the wind, areas on the south side of the Pamlico River could see the higher end of the storm surge prediction.

Tropical storm force wind probabilities continue to increase as the Dorian draws closer and the storm expands in size.

“Our confidence is increasing that we’re going to have more direct impacts from Dorian in eastern North Carolina,” Glenn said Tuesday night. “You’re going to be able to feel effects well away from the center of the storm. Don’t let your guard down because it’s diminished the category.”

While Dorian’s forecasted track brushing the North Carolina coast had not changed much at all between Sunday and Tuesday, authorities are warning that a little bit of wobble in the storm’s path could make an enormous difference.

“The forecast track largely hasn’t changed. We’ve been showing the storm brushing the coast for I don’t know how many updates,” Simms said. “It could wobble a little bit back and forth depending on how this thing tracks. There’s still a chance it could come inland — that might make a difference in the magnitude of the impacts of the region, but there will still be impacts.”

The uncertainty means local emergency management officials are urging people to prepare for the worst, regardless.