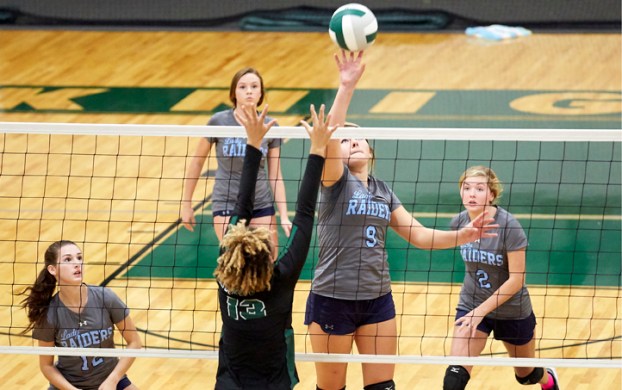 Greenfield School senior Kaelyn Wall turned in a sensational performance and the opposing coach was quick to acknowledge as much.

But balance and its get-it-back style propelled the Pungo Christian Academy team of coach Melanie Eddleman to a 25-22, 11-25, 25-23, 25-15 upset of host Greenfield in the second round of the North Carolina Independent Schools Athletic Association 1-A volleyball playoffs Thursday evening.

Pungo will be the guest of top-seeded Kerr-Vance Academy of Henderson at noon Saturday in the third round.

Pungo finally overcame Wall, who, in her Greenfield farewell, slammed a career-high, 31 kills and notched 15 digs. Wall asserted her presence by pouncing at the net and blasting winners from the middle row.

Wall never relented when the situation grew bleak in the third and fourth sets.

“I knew it was going to be my last game if we lost — and I didn’t want to lose,” she declared. “I had to give it everything I had.”

The Lady Knights also failed to capitalize on an excellent opportunity to win the first set.

The combination of freshman Ysabella Saldi serving and Wall prowling at the net bolted Greenfield to a 5-0 start. The Lady Raiders appeared dazed.

However, Pungo regrouped and cut the deficit to 12-10 behind seniors Ashley Spencer and Josie Hudnell. An ace from senior Brandi Garrish produced a 13-13 standoff and a Greenfield time-out. Trailing 15-13, Greenfield rallied out front 16-15 on a Wall kill. A tip from freshman Reagan Stoop vaulted the Lady Raiders back out front 18-17. A tip and then a kill from sophomore Haley Elliott sealed the first set for Pungo.

“We just had to figure out strategy and which players needed to play where,” Eddleman explained. “That was completely different from what we’ve done in the past. I just told them to get out there and finish it. We kind of picked it up.”

Pungo surged to a 10-6 edge with junior Lauren Ricks serving and built the margin to 15-10 behind the hitting of Stoop. After drawing as close as 11-10 and 18-16, Greenfield seized the lead at 21-20 on a Pungo net error. Lady Knights’ mistakes were frequent in the fourth set as Pungo constructed cushions of 6-2, 9-3, 13-4 and 22-6 behind junior Riley Cutler, Garrish’s digging, and the serving of Stoop and Spencer.