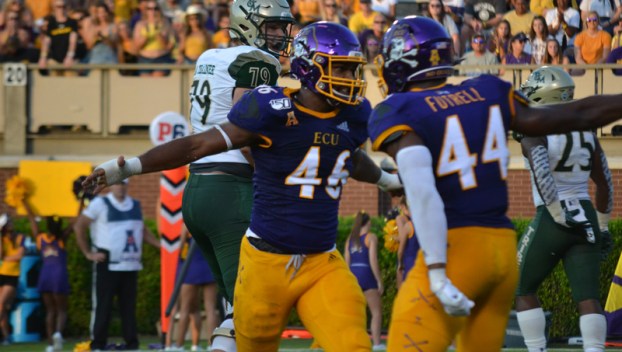 The quartet’s selection are the most by the Pirates in one season since they had six honorees in 2015.
Futrell, who garnered his first career all-conference honor, led the Pirates in four statistical categories that included total TFLs (16.0/-80 yards), sacks (11.0/-68 yards), quarterback hurries (11) and forced fumbles (three). One of two defensive captains, Futrell tallied 63 stops (37 solo), which included a career-high eight at NC State in the season opener, and registered a TFL in 10 of 12 contests. The Winterville native stood among national leaders in sacks (12th), TFLs (21st) and forced fumbles (21st), while ranking third in The American in sacks and fourth in stops behind the line.
Verity earned his second career all-conference accolade after leading the league in field goals made (24), field goals made per game (2.00) and kick scoring (105), while standing third in total scoring and sixth in field goal percentage (82.8 percent). The Bremen, Ga. native is among national leaders in total field goals made (t-2nd), field goals made per game (2nd), total points (20th) and scoring per game (22nd/8.8 ppg).

A semifinalist for the Lou Groza Award in 2019, Verity set ECU single-season (24) and career (60) records for field goals made, while moving into fourth-place on the school’s career list with 280 points. He made at least one field goal in all 12 contests (multiple seven times) and extended his current streak to 13 games with a field goal made (dating back to 2018) with his season-long 51-yarder against Tulsa.
In his first year with the program, Johnson led the team in reception yards (908), yards per catch (16.8) and 100-yard receiving games (four), while standing second with Blake Proehl in receptions (54) and receiving touchdowns (four). The Greenville, N.C. native set an ECU and AAC single-game receiving yards record with 283 against Cincinnati (on a career-high 12 catches), which also stands as the highest single-game output in the nation this season. Johnson ranks among the league leaders in receiving yards per game (6th/75.7) and receptions per game (10th/4.5), while ranking nationally in receiving yards (39th) and receiving yards per game (40th/75.7).
Smith started all 12 games at left tackle and helped the Pirates average 430.2 yards per game (288.8 pass, 141.3 rush), which ranks sixth in the league. He anchored an offensive line unit that produced three, 100-yard rushing performances and provided pass protection for five, 300-yard passing efforts by Holton Ahlers, which included a single-game record 535 yards against Cincinnati. The Pirates produced 480 yards or more of total offense six times with a season-high 644 yards at SMU.