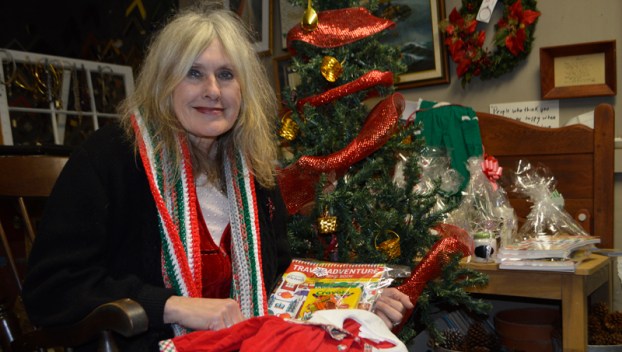 NO STRINGS ATTACHED: More than half of the space at Susan Pickens’ frame shop on East Sixth Street is filled with free gifts that local children, students and people in need can take home to give to loved ones during the holidays. Here, Pickens shows one of many wrapped gift bags donated by Wesleyan Pentecostal Church of Washington and a dress she hopes will find a new home. (Matt Debnam/Daily News)

In a little frame shop on Washington’s East Sixth Street, the spirit of giving hangs strong in the air. While half of the store serves as Susan Pickens’ workspace, where she frames photos, paintings and family heirlooms for preservation, the other half is filled with items free for the taking, gifts from Pickens to others who might give them again to someone else.

For the past 13 years, Pickens has made it her mission to offer these gifts during the Christmas season. Children, students, those who need something to give loved ones during the holidays — Pickens welcomes them with open arms, remembering her own experiences with gift-giving during the holidays.

“When I was in second grade, I lived outside Pittsburgh, and it was a big thing to go to the big city and look at the Christmas decorations,” Pickens said. “I remember my daddy giving me $2 to pick out a present for my mom. When my mother died, when I was 36 years old, she still had the necklace I had given her in second grade. It was such a big thing to give it to my mom, and a lot of kids get really excited about giving presents.”

Pickens isn’t alone in her efforts, however. An assortment of gift bags and goodies provided by Wesleyan Pentecostal Church of Washington round out the gifts local kids can pick for their parents, siblings and others. Smyrna Free Will Baptist Church in Blounts Creek has also given for the effort as well.

“The little kids that come in, the parents don’t care what they get, it’s just the thought,” Pickens said.

In addition to gifts for the holidays, Pickens also keeps a selection of clothes and other useful household items at the store in the back room, which she shares as part of an effort called Carmen’s Army.

The effort is named for her mother-in-law, the late Carmen Martinez Burrus Mayo, who was a champion for helping migrant women in Hyde County during her lifetime. Pickens started Carmen’s Army in 2018, after flooding during Hurricane Florence left a group of migrant women in the Aurora area with next to nothing.

Once their needs were fulfilled, Pickens had a number of items left over, and decided to open it up for those in need in the community.

It’s not a nonprofit. It’s not a big multinational relief organization, with tons of resources behind it. It’s just one local small business doing its part to spread Christmas cheer. Even though the store flooded during hurricanes Florence and Matthew, as did her home, Pickens persists in her efforts to help others.

“One of my favorite scenes in a movie is from ‘Fried Green Tomatoes,’ when the girl is on top of the train, throwing out food to the hobos,” Pickens said with a smile. “She’s my hero. I always wanted to be a missionary … I just feel like I can’t repay people who have been good to me. They’re the wind beneath my wings, and I just have to keep it going for them.”

Winter weather up in the air

Open-source textbooks save Beaufort students over $50,000 per semester

Wells Fargo to close Belhaven branch in May

The Pirates are coming to Bath Fest 2020

In the air: the origin of Valentine’s Day and celebrating it year-round