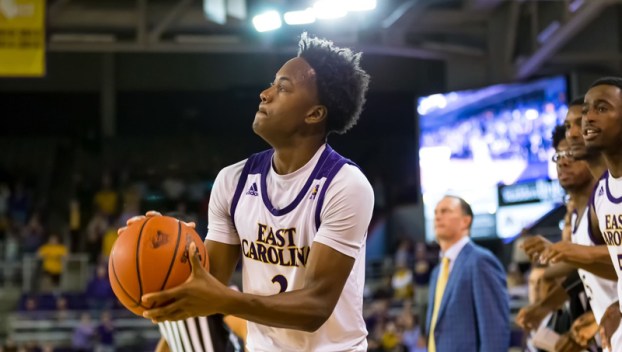 GREENVILLE — Tristen Newton hit a 3-pointer from the left corner in the closing seconds and East Carolina knocked off Southern Methodist 71-68 on Saturday.

SMU’s Tyson Jolley made two free throws to tie the game with 12 seconds left. Following a timeout, ECU’s Tremont Robinson-White dribbled the length of the court and was challenged at the basket, but he found Newton for the game winner.

“(Robinson-White) drove it, Jayden set a really good screen, and Tremont got downhill. So, we were wondering if we were going to help on the drive, and if we don’t help on the drive, we’ll get a layup,” head coach Joe Dooley said about the final play. “Once he got around the corner, they helped, and he threw the ball to Tristen. Obviously, Tristen made a huge shot. We cleared Tristen out of the corner, Tremont got downhill and made a heck of a play.”

Gardner had 14 points in the second half and East Carolina made 7-of-17 3-pointers.

Robinson-White scored with 1:50 to play to make it a 3-point game. He then came up with a steal and was fouled. He made the first free throw, missed the second, but Gardner grabbed the rebound and made the put back to tie the game at the 1:19 mark.

“They’re probably the best offensive team in the league,” sophomore Jayden Gardner said. “They’re skilled, size everywhere, very tough to guard, but we held our own tonight and we didn’t turn the ball over, and we got to shoot the ball.”