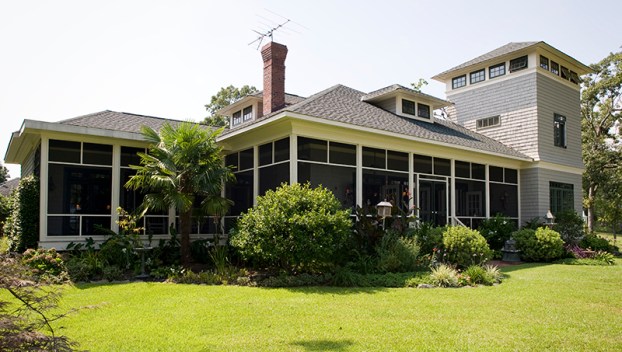 TWINNING: The Mansfield home on the western shore of Bath Creek is an exact replica of the Little Kinnakeet Life Saving Station built in 1904 in Avon. The southern architecture surrounded by gardens, a carriage house and 150 feet of bulkheaded waterfront outside and a collection of antiques and art inside make the home a tribute to the Mansfields’ love of maritime history.

Bath Creek home a tribute to heart and history

BATH — When Pat and Michael Mansfield moved to Bath in the late 1990s, they chose Bath for practical reasons and arrived in an untraditional fashion.

“We ended up here, not knowing anybody, because it had all the things we wanted,” Pat Mansfield said. “It had deep water, we had a university not too far away and healthcare — we knew passing ECU it was building, building, building — and it’s affordable.” 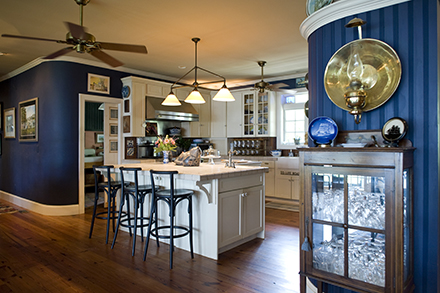 JUST LIKE IT: The original life-saving station featured curved, plaster walls. Here the Mansfields learned by trial and error how to recreate the look in their own home.

The deep water was for their 47-foot Vagabond ketch, which spent a decade making a statement at the end of the Mansfields’ dock on the western shore of Bath Creek. There was no house — there was no need for one because the native-Wisconsin couple lived on their boat. But sometimes, the weather wasn’t so cooperative, so they eventually built a carriage house at the top of a sloping bank, a place to escape the wind, rain or cold, to store things and work on projects.

“The carriage house has the walk through from the front through the back. That’s a whole room in itself, that stored things. That was done several years before, when we were living on the boat, before we decided we wanted a house,” Mansfield said.

The couple built a boardwalk along the 150-feet of bulkhead for easy trips lugging supplies to and from the Vagabond. For three years, they lived on the boat, but in the third year, they started talking about a more permanent structure. What resulted is a recreation of place that celebrates southern architecture and North Carolina maritime history. 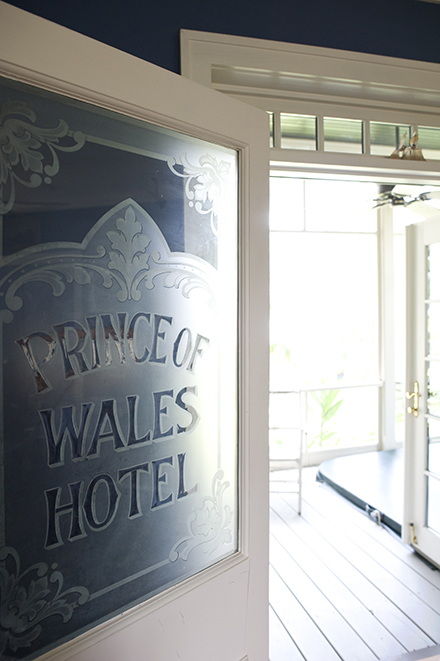 HISTORIC: The front door makes an immediate statement to first-time visitors. The door hales from the famed Prince of Wales Hotel.

The Mansfield home is an exact replica of the Little Kinnakeet Life Saving Station in Avon, built in 1904. Featuring curved wooden interior walls, porches on the front and back, shingled exterior walls and a three-story tower where the guardians of the sea once searched stormy horizons for vessels in distress, the Mansfield house was, and still is, a labor of love.

“So two romantics married each other, and — c’est la vie — we’re living with it,” Mansfield said.

Inside, a ship-like feel is established with interior walls of deep blue or richly stained planks; paintings and models of ships, brass and glass lanterns; a master bed from the island of Java with head- and foot-boards heavily carved with mermaids; a collection of blue and white china plates featuring sailing vessels; a mural on a stairwell wall depicting the coastline of North Carolina and its historic life-saving stations. There’s a bathtub that came from a Terra Ceia farm; a table modified with 17-inch-wide planks from the same place. Partially inspired by the beach house in the movie “Message in a Bottle,” it speaks of a different era. It feels old, even though it’s a fairly new home.

There’s a reason for that. 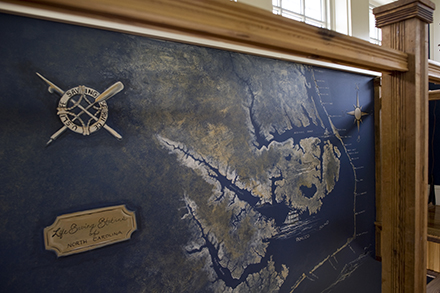 MARITIME HISTORY: A mural depicting the coastline of North Carolina and the life-saving stations of the Outer Banks decorates the stairwell in the Mansfield home.

“Some things are very eastern North Carolina, some things are just my whimsy. It’s filled with our travels, things we inherited from our parents, our interests,” Mansfield said. “All the floors except the big main floor upstairs are all recycled wood. I believe it came from textile mills.”

Every door in the house has a unique, and likely antique, provenance, including a statement front door that hales from the famed Prince of Wales Hotel. Countless hours were spent sourcing pieces and parts of the Mansfield home.

It’s lived in, yet unfinished. A second-floor space that could be bedrooms and living area is open space — in the original Little Kinnakeet Life Saving Station the area it was the “survivors loft” where rescued victims of shipwrecks recovered.

“When I say finished, it’s always been in a work in progress. … I’ve said I’ve needed another a project. Maybe I should finish this one first,” Mansfield laughed. 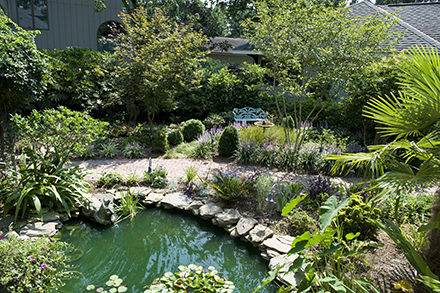 TRANQUILITY: A brick path not only meanders through the garden and frames a small pond, it also bisects the carriage house’s two rooms.

Plenty of the home is finished, including a bricked path that meanders through the covered walkway between both rooms of the carriage house, then continues on a wandering route through elaborate gardens and pond. It’s a home that visitors are surprised and amazed by, a comfortably living piece of history.

“When people are looking at the whole thing, it’s really the gardens, the flower shed, all of it. It’s just putting one piece of the giant puzzle together, to me, people are interested in those ideas if they’re interested in the house at all. … The structure is wonderful with porches that are on three sides. Then you have the advantage of ¾ of an acre of land with 150 foot boardwalk with the access to the water and the three-story tower,” Mansfield said. “Whether it’s kids, or whether it’s the adults — they all have fun in learning about the history. I know quite a bit now about the history of Bath, the area, and the Outer Banks, and how it worked with the economy. It all fits together.”

Michael Mansfield sadly passed away in 2018; the life-saving station they made a home remains home to Pat Mansfield, but it’s a lot of house for one person. It could be for sale, if the right buyer comes along — someone who appreciates maritime history, eastern North Carolina history, history in general and the Mansfields’ vision. 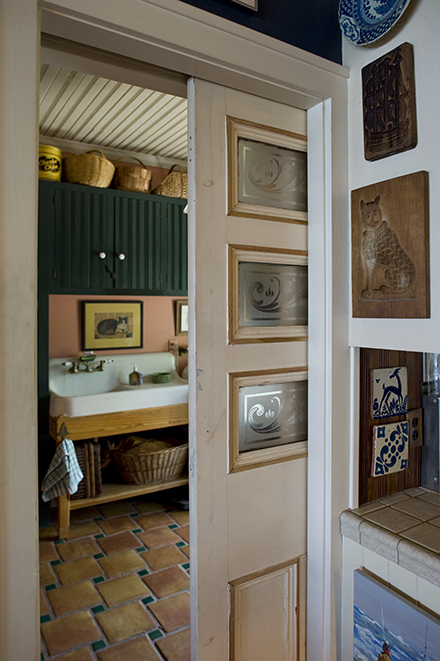 ANTIQUITIES: Every door in the house tells a story. Many of them antique, each has been reclaimed for use in the Bath Creek home.