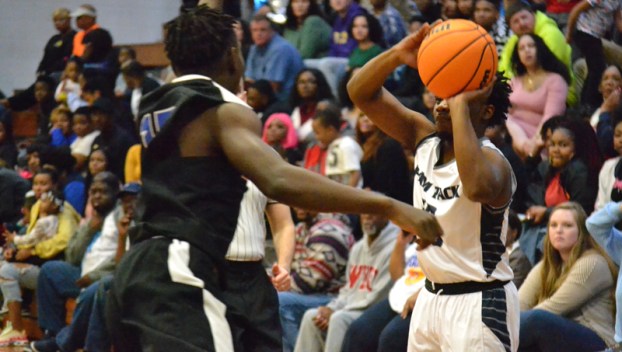 Washington High School’s Jayshawn Blackledge was given an opportunity to be the manager for the Pam Pack’s basketball team for his senior year, and capped it off brilliantly at Senior Night on Tuesday.

Blackledge tried out for the Pam Pack’s basketball team prior to the beginning of the season, but didn’t quite make the team. However, Pam Pack head coach David Allewalt asked Blackledge if he wanted to be the manager of the team, and have an opportunity to dress on Senior Night.

“He told me that I did better than they thought I would, and I turned a lot of heads (during tryouts). He said that I would be given an opportunity to dress out on Senior Night if I wanted to,” Blackledge said. “I honestly had more fun doing it than I thought I would. I met a lot of new people, and I was still able to hang with my guys.”

As the season progressed and the Pam Pack played some of its best basketball in decades, Allewalt stayed true to his word. Blackledge took the floor in a No. 13 jersey and got in the game in the second half, as the Pam Pack had a hefty advantage on the West Craven Eagles.

“I was thinking about whether to try and create a shot off the dribble or have a teammate set me up. When I checked in all they told me was to get open and they would find me, and that’s what they did,” Blackledge said. “I got a great pass from Rashod (Smith). I was able to catch the ball in rhythm, set my feet and let it fly.”

He splashed it. The crowd erupted and started chanting Blackledge’s name. He described it as an unforgettable moment.

“It felt amazing. Earlier that day I had practiced different shots from different areas of the court to try and simulate the possible looks I would have in the game. I got to a spot that I was comfortable and familiar with, and just waited for the pass,” Blackledge said. “When the ball went in and the crowd started chanting my name it was like a dream come true. It was a moment I’ll never forget.”

Allewalt defined the moment as “magical,” following the Pam Pack’s 86-53 victory over the Eagles on Tuesday.

“For him to hit that 3 was magical,” Allewalt said. “I just looked at the bench and said, ‘that’s Senior Night.’ I was out in the hallway before all the players were announced and I was making sure they were all of them were there when his mom walked up to me, tapped me on the shoulder and said, ‘I just want to thank you for giving my son this opportunity on Senior Night, and I appreciate that you are a man of your word.’ That meant a lot to me. I was just so happy he hit that shot.”

Blackledge will continue to serve as manager for the remainder of the season as the Pam Pack head into the final game of the season Friday, and postseason play beginning next week.