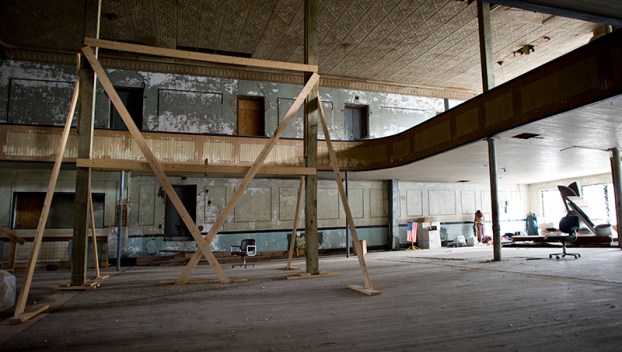 IMMINENT FAILURE AVERTED: Though the 1928 Turnage Theatre was restored in the early 2000s, the roof of the original, circa-1913 vaudeville theater was in danger of imminent failure. With the help of a USDA/Rural Development grant and many donations, work to fix the roof — and save the theaters — can start. (Vail Stewart Rumley/Daily News)

Arts of the Pamlico is $714,000 closer to restoring the roof of its home, the Turnage Theatre.

The arts nonprofit announced Thursday that AOP is the recipient of a substantial USDA Community Facilities grant that will help pay for the replacement of the roof and leverage more funding. It will be added to the more than $300,000 raised through local donors, the Fox Theatre Institute and the City of Washington.

“What this means is that we can go forward with replacing the roof. It gives us over a million dollar mark and allows us to put the contracts in place,” said Debra Torrence, executive director of Arts of the Pamlico.

Torrence said the entire roof structure of the circa-1913 theater is in a state of imminent failure, including at times water running down through lights in the theater’s hallways during major weather events. Had the grant not come through, the prospects would have been dismal.

“Everything would have been jeopardized,” Torrence said. “If the envelope is broken in a historic building, that leads to structural problems, mold.”

The cost of the project — approximately $1.3 million — meant that AOP needed to expand its fundraising reach.

“There’s not enough funders out there, that (we) can raise $1.3 million in small community. When you look at funders across the nation, there’s a handful for capital improvements. We’ve turned over every single rock that we can — to have the ability for a rural community to support such a capital project is huge,” Torrence said.

Work on the roof is expected to begin mid-May to early June and is not expected to affect events and programming at the theater. One the reasons AOP will be able to operate as usual is the planned use of a self-erecting tower crane attached to the building, as opposed to free-standing crane. Self-erecting tower cranes have a smaller footprint, operating from a fixed position. They must be placed on site by qualified field engineers, a process that is expected to take 60 to 90 days, according to Torrence.

“It will be an amazing site, a highly unusual site. I’m hoping schools and local engineers will take advantage of that,” Torrence said.

The Turnage Theatre, after years of disuse, seemed to be heading toward demolition when a group of likeminded people came together to raise the funds to restore it. The ground floor and the palace theater, built in 1928, reopened to the public in 2007; the 1913 vaudeville theater has remained largely untouched, until now. A declining economy led to the theaters’ foreclosure, and in 2013, the former Beaufort County Arts Council, now Arts of the Pamlico, purchased the building. The Turnage is now home to art galleries, a catering kitchen, a fully restored 432-seat palace theatre, recording studio, costume shop, a green room/open arts studio and dressing rooms. The theater also serves as a meeting place for visual artists, youth, art groups, community organizations, a traditional music group, a writers group, a natural fibers group, comedians, dancers, community theatre for youth and adults.

The grant is an expression of the purpose of the program, according to Robert Hosford, North Carolina director USDA/Rural Development.

“Rural Development is hoping to add to the renaissance of your town and community. It’s not one singular project that brings back a vibrant town such as Washington, but a number of small efforts that snowball into a major change. We are proud of this project, happy for the town of Washington and hoping for more projects, like this. When rural America thrives, all of America thrives,” Hosford said.

With the majority of funding in place, work to stabilize the roof can start, but Torrence is already looking for sources for the remaining $300,000.

“It takes a village — it’s true. I just want to thank everyone for their support. … We’ve still got more to go. If anyone wants to give another $5, that would be great,” Torrence laughed.

Donations to the Raise the Roof campaign can be made at www.artsofthepamlico.org/raise-the-roof/ or by contacting Lexie Buck at l.buckaop@gmail.com.

Winter weather up in the air

Open-source textbooks save Beaufort students over $50,000 per semester

Wells Fargo to close Belhaven branch in May

The Pirates are coming to Bath Fest 2020

In the air: the origin of Valentine’s Day and celebrating it year-round