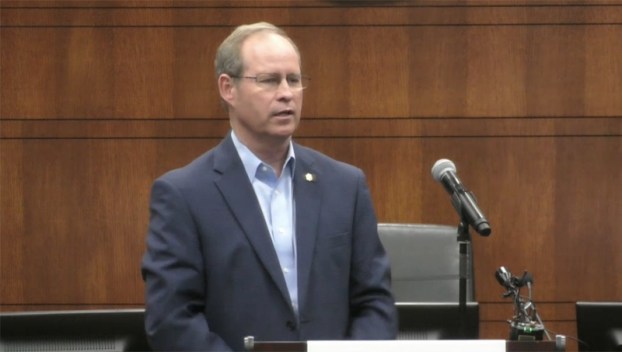 NEXT DOOR: U.S. Congressman Dr. Greg Murphy, along with Vidant Health CEO Dr. Michael Waldrum and Greenville Mayor P.J. Connelly encouraged counties and municipalities to follow suit with Greenville and Pitt County orders for residents to stay home. Beaufort County leaders are encouraging the public to do so, but weren't planning to issue a stay home order as of Wednesday. (City of Greenville)

“We are not, right now, at a position where we’re going to recommend or move forward with a stay at home or shelter in place order,” Beaufort County Manager Brian Alligood said in a conference call with municipal leaders Wednesday. “Those are things that have happened in other states, and now, in North Carolina, you are seeing municipalities and some large counties move in that direction.”

Alligood said the purpose of the conference call was to engage with municipal leaders on what a local order might look like, when it would make sense to put an order in place and to plan for that possibility. He added that any such local orders may prove unnecessary if North Carolina Gov. Roy Cooper issues a statewide order to the same effect.

“There are a few reasons I’m not making a recommendation right now for the county,” Beaufort County Health Director Jim Madson said. “I think it has to be done by everybody and not just one section. It makes it very hard to have any control measures in place if the whole county isn’t doing it at the same time. I also think it’s not going to be easy to enforce, and that it would cause a burden that might not be needed at this particular moment.”

As of Wednesday, no statewide stay at home order had been issued. Speaking during a press conference Wednesday afternoon, Cooper said the state is encouraging North Carolinians to stay home, with the possibility of additional orders coming soon.

“We want people to stay home,” Cooper said. “Local communities are doing what they think is right, and I understand that. It’s important for us to make sure we are deliberate and get this right. We’re telling people now that we want them to stay home, and we will be issuing additional orders soon.”

Greenville’s Mayor P.J. Connelly announced a stay at home order Wednesday, following a similar order issued for unincorporated areas of Pitt County that went into effect Wednesday. Both include numerous exceptions allowing travel for health care, grocery shopping and the continued employment of essential workers. The order from the City of Greenville makes violations a class II misdemeanor, effective at 5 p.m. Thursday.

“I’m fully supportive of what our mayor is doing and what our county is doing,” Murphy said. “As the Congressional representative for eastern North Carolina, I want to urge other municipalities, other counties and other townships in the 3rd Congressional District to follow the lead of what Mayor Connelly is doing, what Dr. Waldrum is talking about and what Pitt County is talking about — staying home.”

Both the Pitt County order and the Greenville order can be viewed online at www.pittcountync.gov and www.greenvillenc.gov, respectively. For local information on COVID-19, visit co.beaufort.nc.us/departments/human-services/public-health.

This is why they matter

Rotary to kick off grocery delivery for seniors next week

Watson In Homes shifts production from design to COVID-19 demand

Your continued support is appreciated

Why are liquor stores still open?

It’s your time to shine

Do your part — stay home, but don’t ignore your health