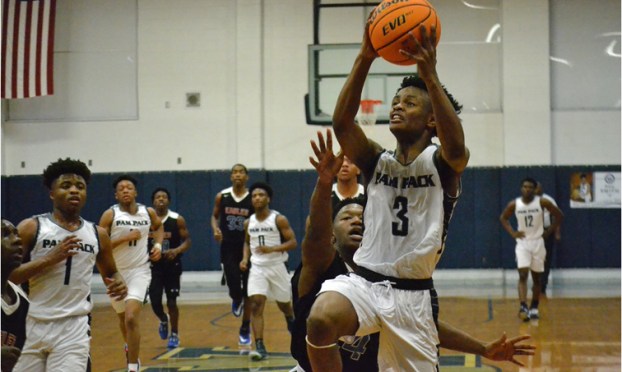 Washington’s senior point guard Rashod Smith decided his basketball future Tuesday via his Instagram page. He will be attending Pitt Community College for the next two years to continue his athletic career.

Smith attended Northside High School in Pinetown for his first three seasons, then transferred to Washington for his senior year.

In Smith’s four-year varsity career, he compiled 1,944 points and 670 assists. He helped lead the Pam Pack to an 18-9 record, and the team’s first playoff appearance since 2008. Washington also won its first playoff game for the first time in a couple of decades.

Head coach David Allewalt said he was excited for Smith.

“Not too much is going to change from the high school level compared with what he’ll be able to do at Pitt Community College. They’re getting a player who’s not going to be afraid of hard work; he’ll improve each and every day. He has a high basketball IQ, sees the floor really well, plays at a really good tempo and knows how to get others involved,” Allewalt said. “The advice I gave him was the same advice I gave all my players going to play college basketball. It’s one of the first real decisions that you make as a young adult that will affect your future. I just do the research, talk to the coaches and explain what kind of players they are going to get, and let him sign with whoever is best for him. I think Pitt was a good fit for him.”

“It came down to two schools and the coach (at Pitt) was just down to Earth, and I really just vibe with him. It’s also close to home so my mom, family and friends can come see me play again,” Smith said about his decision. “The goal is to win a conference championship (when I get there), maybe go even further. I want to make my teammates better, gain more scholarship offers and attend a four-year school.”

When it comes to the best moments from last season, Smith said a couple of things stick out.

“My favorite memory in high school was playing for coach (Mike) Proctor, and when the crowd stormed the court this year after winning our first playoff game,” Smith said.

Allewalt said the entire body of work from the season was Smith’s highlight.

“There are so many moments Rashod had last year that were great. I can’t pinpoint one single moment. … For him to come in for one year, and my first year, come from a rival school and adjust to another school, accept the challenge to continually wanting to become a better person, better player and better student is the highlight in itself, and that’s for real,” Allewalt said. “He helped prepare our program with his competitive spirit. He helped prepare it to jump to the next step and have a certain level of consistency.”