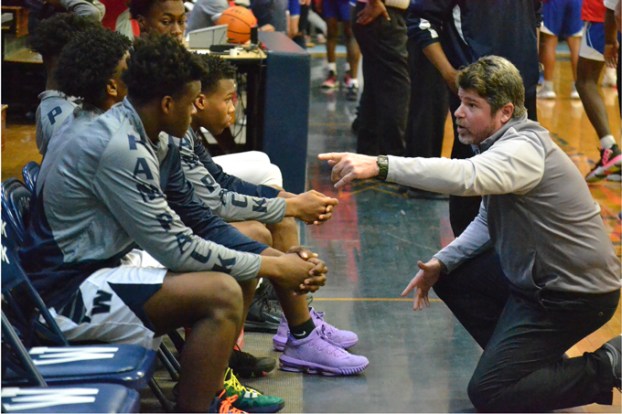 Many things have changed in light of the COVID-19 health crisis, and that includes the high-school sports recruiting process. There have been a number of changes that prevented high school student-athletes from having the full recruiting experience, because most campuses are closed.

Washington High School’s sports program has numerous athletes who were offered by universities, but they were not able to visit them due to school closures.

Many college coaches recruiting for this cycle, including Pitt Community College head basketball coach Darrick Mullins, have exhausted themselves with phone calls.

“Once the NCAA made the ruling about off- and on-campus recruiting, we had to cancel them. We had two kids within 72 hours of coming in to visit before that ruling was made, and we had to cancel them,” Mullins said. “You know, you have a chance for a kid to come down and take a look at your facility and the environment that they would be playing in — for it to bring everything to a screeching halt. I am exhausted just picking up the phone. I was communicating and conversing with (high school) coaches, players and their parents. I like for all the recruits and their parents to come in and see where their kids are possibly going to be playing. I want them to see the campus. I can tell parents, ‘Hey, we’re the sixth-biggest community college in the state of North Carolina,’ but until they see it, it doesn’t resonate.”

Mullins explained that basketball signee Rashod Smith was among those who visited the campus early on, and he was ecstatic about adding Smith to his squad for the 2020-21-basketball season.

Pam Pack head coach David Allewalt said despite how great of a fit Smith was for Pitt, he also said he wasn’t able to visit some of the schools that have him an offer.

“(Rashod) had a lot of schools to show interest and offer him, but he really didn’t have too much time after the basketball season was over to explore those options by visiting campuses; talking to people on campus; visiting the athletic departments; meeting the coaches face-to-face — a lot of that got taken away from the process,” Allewalt said. “I mean, going and talking to possible teammates, talking to counselors about possible majors and class schedules, (Rashod) couldn’t do anything like that for some of these schools.”

A similar situation happened for some of the football players on the Pam Pack football team during their recruiting process.

Head football coach Perry Owens explained that late-winter, early-spring is a time that college coaches come in for spring evaluations, but coaches weren’t able to visit this year.

“The biggest thing with that is, coaches actually come in and shake the hands of some of our players, get to know them and kind of give them the eyeball test rather than just seeing film,” Owens explained.

Virtually, many D-1 schools such as East Carolina, Appalachian State, Tennessee, Western Carolina, Army, Princeton, Elon, Yale and University of North Carolina-Chapel Hill reached out to Owens about some of his football players, and Owens sent a packet of his best players in each graduating class, listing their measurements, GPA and link to their film.

Another big question mark is whether or not summer football camps — to which numerous Pam Pack players were invited— will still happen.

“We don’t even know if we’re going to have camps at this point. So, if you’re a 2021 player, and a coach wants to see you run the 40 and perform against some of the best in camp, we don’t know if they’re even going to have these one-day and satellite camps. Recruiting has become virtual, like the classrooms,” Owens said. “The process was already hard enough to get our kids that live in rural areas or small towns exposure as it is. Now, making it virtual pretty much monopolizes recruiting in a sense of not getting that same level of exposure or attention, because we don’t have high populations, and we’re not on I-85.”

Schools, recruits and coaches are all adjusting to a new normal, all under a level of uncertainty, and changes still could be to come.