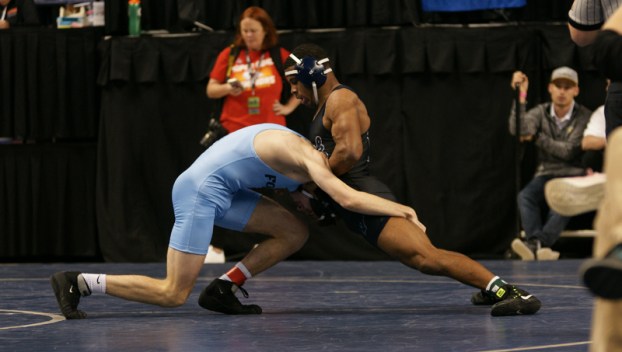 STATE TOURNAMENT: Washington’s senior wrestler Mykell Warren wrestles in the first round of the NCHSAA 2-A State Tournament in January. Warren will attend St. Andrews University to wrestle this winter. (Melissa Moore)

Warren said he is excited to begin his journey with a new school.

“It feels great! I feel like I deserve it because I’ve worked so hard to get to this point over the years,” Warren said. “I’m excited to start a new journey at a new school.”

Pam Pack head wrestling coach Chris Penhollow was ecstatic for Warren, and said he was glad Warren was able to come away with at least one victory in last year’s state tournament.

“Mykell got a pretty tough draw last year and this year. He was fortunate to come away with a win, and his only losses were to the state title winner and the third-place winner,” Penhollow said. “He’s just one of those all-around great kids. He’s kind of quiet, loves to work hard, loves to grind and doesn’t do anything stupid. He’s very smart, great student in the classroom. If you talk to any of his teachers that he’s had these four years, they don’t have anything negative to say. He’s a great personality, well-liked by the whole student body and has been a standout in everything he did here.”

Warren’s favorite memories at Washington were both on the gridiron and the mats on the gym floor.

“In football, (my favorite memory) was just being out there playing with my brothers while the fans and cheerleaders were cheering us on. In wrestling, the best thing was after weigh-ins and you get to eat (normally again),” Warren said.

Penhollow’s best memory of Warren’s tenure was more specific, as he described Warren’s individual tournament victory at Fuquay-Varina as the best he’d ever wrestled.

“The No. 1 thing, I think about in his four years with me was last season in Fuquay-Varina for the Dash Classic. That was the best I’d seen him wrestle in an individual tournament,” Penhollow said. “He wasn’t hesitant, and he was getting to his shots. Me and my assistant coach Dan Kock were looking at each other and thinking, ‘When this kid goes and decides to take a shot, there’s nobody that can stop him in the state.’ He went on to win the championship in overtime against a really tough kid from Cape Fear High School, to win his first big individual tournament.”