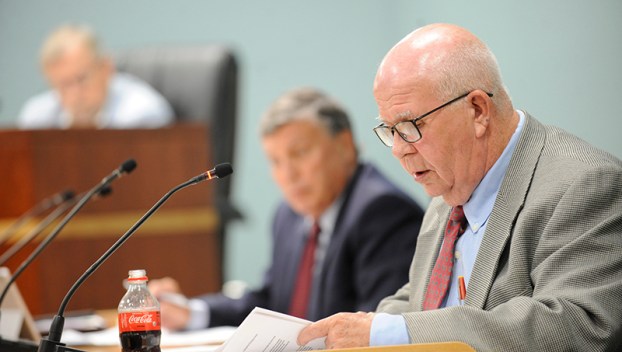 MAJORITY RULES: Commissioner Hood Richardson reads from the resolution he authored, that would have attempted to lift statewide restrictions meant to stop the spread of COVID-19. The resolution failed to pass the seven-member board. (Vail Stewart Rumley/Daily News)

Board votes no on county’s immediate reopening

The Beaufort County Board of Commissioners voted against the resolution attempting to lift the statewide restrictions set in place March 30 to prevent the spread of COVID-19.

During the public comment period at the start of the meeting, several Beaufort County residents spoke in favor of the resolution’s passage. Beth Glisson talked about how The Wine Crate, which she owns with daughter Paige Horne, has lost 42 business days — and potentially could lose much more, as Horne recently had invested savings to expand the business just before Gov. Roy Cooper’s order went into effect. North Carolina Rep. Keith Kidwell said the “throngs of people” seen at Walmart, Lowe’s and other public places indicated small businesses could be opened with relatively little danger, though he also pointed out that the elderly or those with medical issues should continue to take precautions. Tandy Dunn talked about how Beaufort County does not compare to Wake County or Mecklenburg County, places with larger populations and much higher incidents of the virus. Steve Radar, a former lawyer for North Carolina Department of Health and Human Services questioned the statutory authority of the governor to issue the executive orders that closed some businesses yet allowed those deemed “essential” to keep operating.

Dr. Jessica Triche, a family physician, was the lone voice present in opposition to the resolution during public comments.

“These things are working. We’re flattening the curve. … All of us are doing this, and it’s working,” Triche said. “As a concerned Beaufort County resident and as a concerned citizen, I ask you please to vote against this resolution.”

Though Triche represented the minority present at the meeting, both Waters and Rebholz said they’d heard from many constituents via email and phone call expressing their unease with “opening up” the county to business as usual — including from some business owners.

“I would say that it’s almost split — the people who want to continue to stay closed and the ones who want to open up,” Water said.

Waters said he had plenty of issues with the limitations placed on some entities, but not others.

He pointed out that a county resolution would not trump what’s decided by the City of Washington, and the city council just last week unanimously voted to uphold Gov. Roy Cooper’s decisions regarding reopening in phases. Ultimately, Waters said he was opposed to breaking the rules set in place by the governor.

Evans used the same reasoning, pointing out that Gaston County had walked back a similar resolution once they realized the statewide order still applied. Evans said the letter he sent Cooper last week asking the governor to empower governments with greater authority to create their own reopening plans was a better way to go.

For Langley, the lack of a plan was a major hurdle for him: “There is no plan. You simply can’t just open up,” he said. “If you said you actually had a way of doing this, it would be something I’d consider.”

Rebholz said he struggled with the decision to vote for or against the resolution, bothered by the constitutional issues and recognizing the need to move forward, but overwhelmed by the number of phone calls and emails he received from those opposing a wholesale reopening of the county. Rehbolz pointed to an earlier presentation by Beaufort County Health Department Director Jim Madson, in which Madson said the health department currently does not have the amount of personal protective equipment needed to ramp up testing for COVID-19 to the degree that’s needed for effective contact tracing. Rebholz also indicated that by Friday, the state may already be headed toward Phase One of reopening.

Booth said he had not heard from anyone asking that he vote in favor of the resolution; his vote was based on what he was hearing from residents.

Richardson said that Beaufort County’s numbers show that it’s been successful in flattening the curve: “No one has died. As the health director states, there’s only been two people that have had to have breathing assistance.” Richardson said his motivation was the people who are struggling, who may not be able to reopen businesses — younger people with children who haven’t had the time or ability to create other sources of income.

Deatherage acknowledged the need to continue social distancing and to follow certain protocols, but he opposed the governor’s issuance of an executive order.

“While it may have flattened the curve, it has destroyed lives,” Deatherage said.

Deatherage continued by saying the federal government’s response, specifically with SBA loans, has been both inefficient and wrong, considering that money has, in some cases, ended up in the wrong hands — and not the hands of small business owners.

“We are in dire straits, not only from a business perspective but soon from a governmental perspective, when we try to extract tax money from these folks,” Deatherage said. 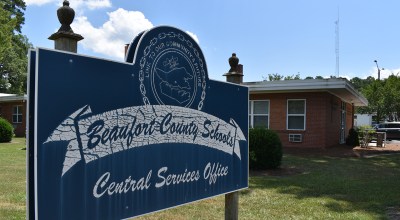 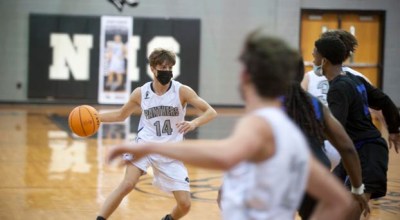