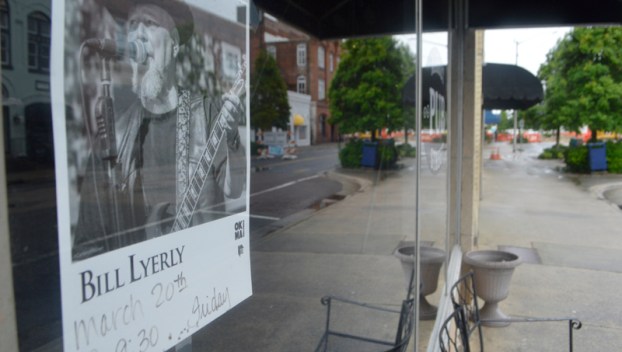 LIVE IN CONCERT: A poster advertising a Bill Lyerly concert March 20 hangs in the window of Market Street Pub. The Pub was forced to close March 17, and will be unable to open for another five weeks under Phase II of the state’s reopening plan. (Matt Debnam/Daily News)

For more than a year, Todd Rodzen has put considerable work into opening a new restaurant in downtown Washington. The town’s newest eatery, Captain Cooks was on the verge of opening its doors in March. Rodzen had just submitted an application to the Beaufort County Health Department for a final inspection before the COVID-19 pandemic changed everything.

“It put me in a real bind,” Rodzen said. “I was two days away from getting locked out by the landlord. They sent me a 20-day notice, but I managed to get some donations to continue on. I had just submitted the Health Department application just before the pandemic hit, and that really put a damper on plans. I expected to be open the past two months, so it’s been really tight.”

Now that North Carolina has entered Phase II of the state’s three-phase reopening plan, Rodzen and other restaurant owners are working through how to safely open their restaurants to the public. While many local restaurants already have a dedicated client base, Captain Cooks faces the added challenge of opening up for the first time in what has often been described as a “new normal.”

With both in-house dining and a bar at the restaurant, Rodzen says he hopes to open his doors in the next few weeks, all while adhering to a long list of regulations and recommendations passed down by the state.

“We expected to open slowly, so cutting out seats is not going to be as critical to me for the first month, but I can understand where it’s not a viable situation for other, larger restaurants,” Rodzen said. “You have rent and overhead that’s based on a certain numbers, and it’s just not going to work with the smaller numbers.”

In Belhaven, The Tavern at Jack’s Neck closed its doors on March 17. With much of the restaurant’s client base coming from out of town, Tavern owner Jimmie Southerland says it hasn’t been worthwhile to open for takeout, and opening at less than 100% capacity doesn’t make sense financially or logistically.

“It’s a matter of getting your employees back together, training, cleaning, ordering food, revamping your menu because the prices of meat have gone up,” Southerland said. “There just wasn’t ample time to do that with us being shut down the entire time.”

While her staff has already started that process, it may be late June before the Tavern opens. In some cases, she says it may be difficult for her to bring staff back into the loop, because they’re making more money on unemployment than they would be at work. For now, the two-month wait will continue.

“Tell me that it makes sense to spend a dollar and then hope and pray that you get 50 cents back,” Southerland said. “That’s about as basic as I can get on the explanation of opening at 50%.”

While restaurants, both with and without bars, can open up this weekend at 50% capacity, that’s not the case for bars like Market Street Pub. As a bar/entertainment venue, the downtown watering hole was closed by executive order on St. Patrick’s Day, one of the pub’s biggest business days of the year. Now, under the new guidelines announced in Phase II of reopening, the bar will remain closed for another five weeks.

“We’re devastated about it,” said Pub owner Connie Langley. “My employees were all excited about it and thought they were going to get some good news. Of course, yesterday, their hopes and dreams were thrown down the toilet.”

So far, Langley has not been able to get any government assistance for her business. When all is said and done, her bar will have been closed for three months, but the bills like rent, utilities and licenses just keep on coming. If not for her habit of saving money, Langley says the prolonged shutdown would probably kill her business.

Given the chance to operate at reduced capacity, Langley says she feels confident her staff could make social distancing work. With restaurants able to open their bars at limited capacity, she feels as though the discrepancy between those businesses and her business is unfair.

“If we had the chance, we could make it work,” she said. “We could separate our bar stools, we have an outside area we could open up and space it out.”

For the latest updates from Captain Cooks, The Tavern at Jacks Neck and Market Street Pub, see their respective Facebook pages. A complete list of guidelines for reopening restaurants can be found here.