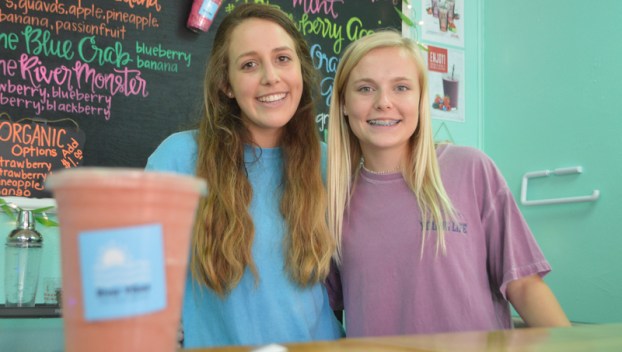 GOOD VIBES: Taylor Moore and Baylee Schmitt serve up an ice-cold smoothie from behind the bar at River Vibes, a new smoothie shop in downtown Washington that also offers kayak and bike rentals. The shop opened its doors for the first time last weekend, despite the lingering impacts of COVID-19. (Matt Debnam/Daily News)

In the best of times, starting a new business from scratch is a daunting endeavor; to do so during a pandemic is no small feat. But that’s exactly what Jennifer Schmitt and her family have done in opening up River Vibes, a new combination smoothie shop/bike and kayak rental spot on South Market Street.

“We signed the lease in January,” Schmitt recalled. “We’ve always kind of talked about it and had a vision on what downtown needs. So we’ve had the vision for a while, but as far as actually leasing this building, it was a spur of the moment decision when we saw the sign in the window in January.”

At the time, no one could have foreseen that the U.S. was on the brink of facing one of the greatest public health crises in a century. COVID-19 wasn’t on the radar. While the virus might have delayed the business opening, it gave Schmitt and her family time to truly make the shop their own before opening day.

“My husband and I, we both have day jobs, so the work we’ve done has been on the weekends,” Schmitt said. “We put floors down, painted, my husband built the bar and did the cosmetics. Where COVID has helped with that, is it gave us time to get in here and be quarantined. We could stay away from people by coming up here behind closed doors and working. It’s been a family project.”

While her husband helped with the construction, her son, Jonathan Schmitt, helped his mom set up the technology needed to run the business, and her daughter, Baylee Schmitt, is helping run the store.

Her other son, Greyson Schmitt, who lives in Wilmington, brought inspiration for the décor, which draws beach influences from businesses in that area. All of the chilled drinks have names based on the Pamlico River, like the “Castle Island” and the “Blue Crab,” furthering the river theme of the shop.

After a lot of effort and hard work, River Vibes finally had its big day this past weekend, serving up ice-cold smoothies on a warm Memorial Day weekend. Opening her doors to both locals and visitors down for the weekend, Schmitt says she was pleasantly surprised by the amount of customers. In some ways, the pent up desire to get out and be away from home may have helped with that, she says.

“We were overwhelmed with the response on opening weekend,” Schmitt said Wednesday. “The first day, it was a lot of family and friends, which is to be expected, but in addition to that, there were people walking through our doors who had been waiting for the doors to open, or who were tourists not even from Washington. We sold well over 150 smoothies since Saturday.”

While the family has smoothie making down to a science, Schmitt says her bike and kayak rentals are still limited, as those items have been in high demand since COVID-19 came into the picture. Still, she has a few rentals available. While the bikes are rented at the store, her kayaks will be launched from the dinghy docks on the waterfront. In the winter months, the store will serve warm drinks such as coffee and hot chocolate.