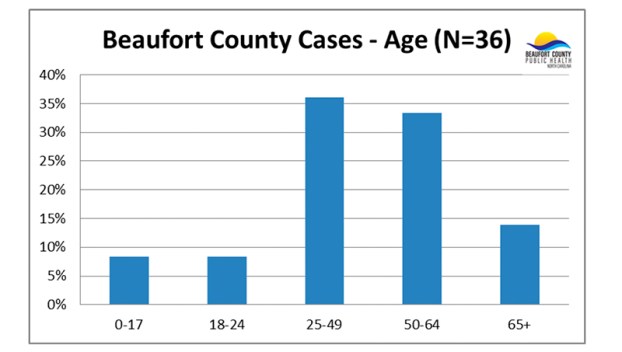 The Beaufort County Health Department released a statistical analysis of the county’s COVID-19-positive cases on Wednesday, breaking down the demographics of who is contracting the disease.

While the county has had only 36 known cases of the virus since March 24, the numbers largely coincide with statewide statistics reported by the North Carolina Department of Health and Human Services.

Statewide, by gender, males represent 49% of cases; females, 51%. In Beaufort County, approximately 44% of positive cases are male; 56% are female.

By race, the number of positive cases statewide are 53% white and 31% black or African American, which represent 64% of all positive cases — of the remaining, 36% are Hispanic. Of Beaufort County’s cases, 56% of those who have tested positive for the virus are white; 22% are black and 22% are Hispanic.

Of Beaufort County’s total of cases, 33% of them have been asymptomatic, meaning they had no symptoms but were discovered either through standard testing during pre-operation or because they were tested after having close contact with someone known to be ill with COVID-19. Data for asymptomatic cases versus symptomatic cases does not appear on the NCDHHS website.

While providers in Beaufort County have tested more than 800 people, since the beginning of April the percentage of tests coming back positive has varied. In early April, 10% of those tested were positive; by mid-April that percentage had dropped to 2%. Another spike occurred around April 24, in which 6% of tests were returned positive, but since mid-May that number has hovered around 2%.

Beaufort County is included in NCDHHS’s region 1, comprised on northeastern North Carolina counties. According to the latest NCDHHS COVID-19 Surveillance Report, regions 1 and 3 (the 12-county region south of Raleigh), are the only two of the seven regions statewide to have decreased in the percentage of emergency department visits for COVID-19-like illness over the week ending May 23.

“Although the total number of people going to the emergency department with fever and respiratory symptoms has gone down, the percentage of them that have to stay in the hospital for at least 24 hours has gone up,” the report reads. “This suggests patients with milder COVID-like illness are either getting care outside the ED or not seeking medical care.”