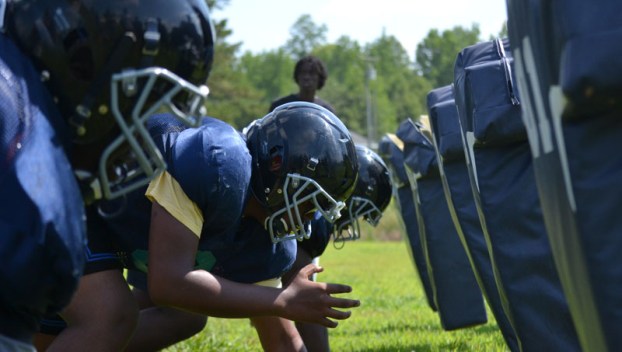 HITTING THE SLED: Southside football players get ready to push the sled in a summer practice last August. The Seahawks and the rest of NCHSAA affiliated teams await the June 15 date to see if they can return to schools for conditioning. (Mitchell Thomas / Daily News)

High school athletes in North Carolina will not be able to condition or practice on school grounds until at least June 15, according to the North Carolina High School Athletic Association.

“The idea is not to start some sports on June 15 or whenever; the idea is to allow opportunities for all athletes to get out and begin conditioning and drills within the guidelines,” Tucker said. “While we hope to return to activities mid-June, we know that conditions change rapidly relative to this virus.”

According to Tucker, the NCHSAA is being “very deliberate” in efforts of a sports return. The goal is to limit the spread of COVID-19 and enable a safe resumption of sports.

Many ideas have been on the table as to what the 2020-21 season looks like. The idea of potentially moving sports seasons has also been tossed around. Tucker pumped the brakes on the idea, but said, “Nothing is off the table.”

“We don’t think it is even wise to begin talking about moving sports seasons right now. We’re not really entertaining that,” Tucker said.

Delaying seasons and shortening seasons is a possibility, which would also include shortening the playoffs and the list of teams that can qualify.

Tucker explained that the NCHSAA has not discussed allowing a minimum number of fans, yet. If it comes to the point where there will be a reduction of the capacity of fans, it would come from the North Carolina Department of Health and Human Services, and it would be the responsibility of the school to implement social distancing.

Temperature checks at workouts, practices and contests are one of the guidelines that the NCHSAA is discussing with athletic directors.

“Schools should go ahead and order thermometers, because it’s probably going to be a while before you can get one,” Tucker said.

If an outbreak occurred on a team, Tucker said they would have to look at tracing, who they played and a number of other factors to make sure the virus didn’t spread any further. However, the NCHSSAA is already making plans in case a second wave or another outbreak occurs.

“If there is another outbreak, we’ll be a little more proactive about knowing what we will do if that day/time should come later in the school year. The NCHSAA would have a plan on how to move forward because plans would already be in place,” Tucker said. “The intention of the board is if we get to June 15 and things are still improving, the board intends to allow all sports to be able to resume in some type of activity, but with no contact.”