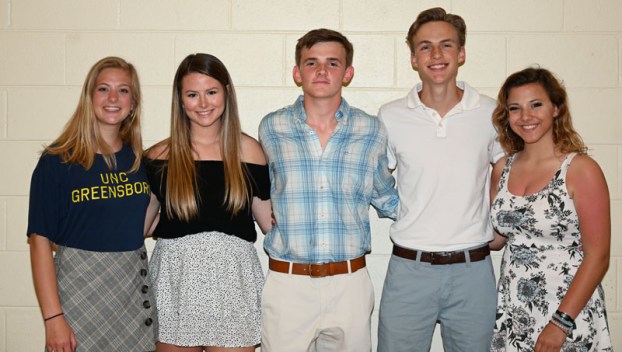 SCHOLARSHIP WINNERS: High School seniors (left to right) Alice Jones, Abbigail Tucker, Will Crisp, Dawson Cox and Julianna LaBarbera were all recipients of Optimist Club Scholarships this year. They each received a $1,500 check toward their educations. (Bill Peebles)

The Optimist Club in Washington awarded five scholarships to Beaufort County seniors. Patty Peebles, the Club Scholarship coordinator, awarded the scholarships to Alice Jones, Abbigail Tucker, Will Crisp, Dawson Cox and Julianna LaBarbera during a presentation with the graduates’ families May 28.

“The Optimist Club is a friend of youth. Our organization is aimed at helping support kids in the community, and help further their educations,” Peebles said. “By us giving away scholarships, it’s a way for us to give back to the kids in our community.”

According to Peebles, scholarships are awarded to seniors who have played a sport and have accumulated a 2.50 GPA or higher. Selection includes consideration of school involvement, as well as community service. Evaluators do not live in the area.

This year’s recipients played in the Optimist Soccer Club and school sports and had a hand in many community service projects, Peebles said. Each was awarded a $1,500 check toward the college of their choosing.

The Youth Appreciation Scholarship went to Alice Jones, graduate of Washington High School. Alice will be attending UNC-Greensboro as an honors college student.

Will Crisp, Washington High School senior, received the Lindley Gibbs Scholarship, and will be attending the University of North Carolina-Chapel Hill.

The Leland “Buddy” Baker Scholarship was presented to Julianna LaBarbera. Buddy Baker is a long time member of the Optimist Club, and volunteers many hours every year for the children and youth in the community.

LaBarbera attended D.H. Conley High School and will be attending East Carolina University in the fall to work toward a finance and business degree.

The Earl Mitchell Scholarship was awarded to Dawson Cox, a Washington High School student. Cox will be attending Chowan University and will play on the Hawks’ soccer team.

Abbigail Tucker received the Youth Appreciation Scholarship, and she will be attending North Carolina State University this coming school year.

Originally, the Optimist Club was awarding three scholarships per year. Last year, they gave away four. This year, Peebles said they had five “exceptional” recipients, so they gave away an extra one.

“(The scholarships) recognizes the youth in our community that have given back by volunteering and helping with other community events,” Peebles said. “All of these recipients have volunteered and participated in the community, either helping other teenagers, children, helped by volunteering as coaches, in the concession stands at the soccer fields and at the hospitals. They’ve been great.”