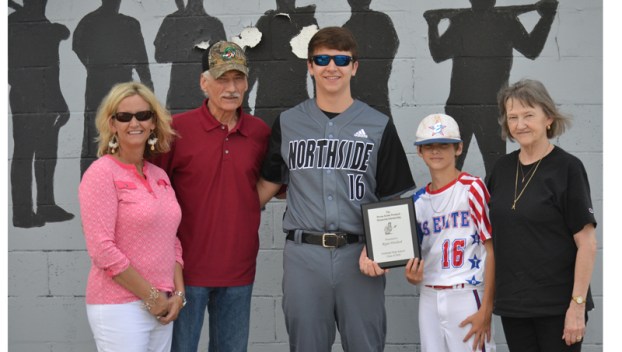 PINETOWN — Each year on Senior Night at Northside High School, the Bryan Keith Woolard Memorial scholarship is awarded to one senior on the Panthers’ baseball team. This year, senior catcher for the Panthers Ryan Woolard was awarded the scholarship Friday.

Bryan Keith Woolard was a former Northside High School baseball standout who died in a tragic automobile accident in 2009. He was named the team’s Defensive Player of the Year and Most Valuable Player in his time as a Panther.

Every year, Keith and Wendy Woolard give away a scholarship in memory of their son, Bryan, who loved the game of baseball. According to Keith Woolard, the scholarship isn’t particularly for the senior with the best stats, but one who has a passion for the game.

“I am very happy I received this scholarship towards school,” Ryan Woolard said. “I am also thankful I get to play in one more baseball game at the Down East Wood Ducks’ stadium before my high school career is over.”

Ryan Woolard will be attending Pitt Community College for his first two years of college.

Ryan Woolard boasted a high school career batting average of .300 and was batting .385 in his senior campaign before the season was cut short after four games. Ryan Woolard played three years of varsity prior to the end of the 2020 season.

Keith Woolard, Bryan’s father and Ryan’s grandfather, said he was upset to see the season come to an early end.

“It’s a shame we didn’t get to see this season. I had big expectations for this team because all the boys grew up together, and it was all falling in the right place,” Keith Woolard said. “This same group of boys won state championships when they were 12 and 15 years old. Ryan was a captain for the team this year, and we were all looking forward to seeing them play.”

Ryan Woolard’s Senior Game at the Down East Wood Ducks stadium in Kinston will be played June 27 at 6 p.m.