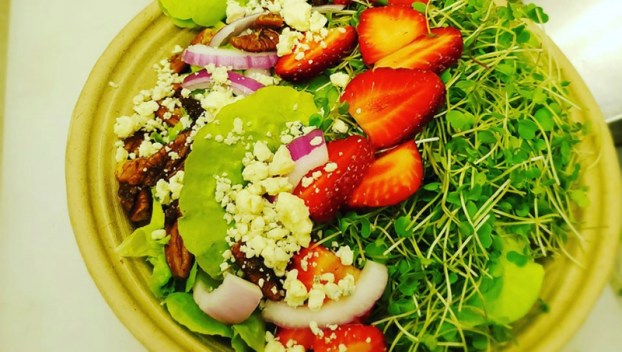 YUM: Fresh salads, soups and smoothies will be the mainstays of Locavore Kitchen, a new farm-to-table restaurant opening in Washington next week. (Angela DeCuzzi)

For more than a decade, Titus Boucher and Angela DeCuzzi have made their living from the land. Their business, Locavore, has gone through a number of iterations during the past 10 years, from an online market/produce delivery service to a mainstay vendor of the Washington Harbor District Market. Next week, the couple will embark on their latest business venture of opening a new farm-to-table restaurant in Washington.

Featuring salads, soups and smoothies, all made with fresh, local ingredients, Locavore Kitchen is a natural extension of what DeCuzzi and Boucher have been doing for the past 10 years: providing healthy, local food options for their customers.

“It’s something that’s slowly been evolving as we’ve been growing vegetables,” DeCuzzi said. “We’ve done a lot of research on how to prepare the vegetables to help our customers use them, and we realized there was a need for people to have a little bit more help preparing their food. They want to eat healthy, and they want to eat local, but maybe they don’t have time to do all that cooking from scratch or don’t know how to do it.”

That’s where Locavore Kitchen comes into the picture. Celebrating its grand opening on July 8, the restaurant will then be open for lunch from 11 a.m. to 3 p.m., Wednesdays through Fridays. All the while, Locavore will still maintain its spot at the Harbor District Market on Saturdays, delivering the fresh produce market shoppers have come to enjoy.

For Boucher and DeCuzzi, the farm-to-table concept is a familiar business model, albeit from the supply side. Since establishing their own farm in Beaufort County in 2016, the two have faithfully supplied local restaurants such as Spoon River Artworks and Market in Belhaven with fresh produce and micro greens.

“That’s kind of been the direction our business has taken over the last five years. It’s been a lot of selling to other restaurants, mostly micro greens,” DeCuzzi said. “When the Harbor District Market opened last year, we decided we wanted to incorporate retail, direct-to-consumer sales back into our business. I’d also been wanting to get into preparing foods and selling at the farmer’s market.”

Finding kitchen space she could rent, DeCuzzi was able to get her feet wet with preparing foods for her customers. From salads to baked goods, there were plenty of possibilities, and she says the dishes were well-received at the market, enough so to take the next step and open a restaurant.

“With the pandemic, it’s really opened people’s eyes to where their food comes from and the food supply chain,” DeCuzzi said. “It’s become increasingly clear how important it is to be food secure. In our region, we can produce most of what we need to survive and not be dependent on other states and even foreign countries. I think it’s more important now than ever to understand where your food is coming from and how it is raised.”

“They have worked so hard, and I’m extremely excited for even more people to try their products, elevated to a whole new level in the new kitchen,” said Washington Harbor District Alliance Executive Director Meg Howdy. “It has been a pleasure to watch their business grow at the Harbor District Market. They have educated our customers and expanded their palates with fresh micro greens straight from their farm.”

Locavore Kitchen is located at 1249 Highland Drive in Washington, across the street from Vidant Beaufort Hospital. To learn more about the business, visit www.locavore-market.com.