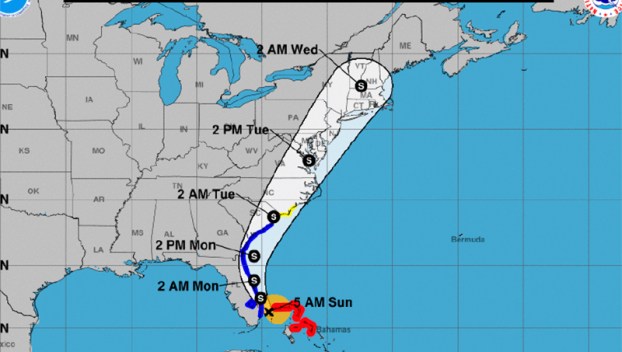 A Tropical Storm Watch means tropical storm-force winds are possible somewhere within this area within the next 48 hours.

– THREAT TO LIFE AND PROPERTY THAT INCLUDES TYPICAL FORECAST UNCERTAINTY IN TRACK, SIZE AND INTENSITY: Potential for wind 58 to 73 mph.

– PREPARE: Efforts to protect life and property should now be underway. Prepare for significant wind damage.

– Several large trees snapped or uprooted, but with greater numbers in places where trees are shallow rooted. Several fences and roadway signs blown over.

– Some roads impassable from large debris and more within urban or heavily wooded places. A few bridges, causeways and access routes impassable.

– Scattered power and communications outages, but more prevalent in areas with above ground lines.

– Peak Storm Surge Inundation: The potential for up to 2 feet above ground somewhere within surge prone areas

– THREAT TO LIFE AND PROPERTY THAT INCLUDES TYPICAL FORECAST UNCERTAINTY IN TRACK, SIZE AND INTENSITY: Potential for storm surge flooding greater than 1 foot above ground

– ACT: Leave immediately if evacuation orders are given for your area.

– Localized inundation with storm surge flooding mainly along immediate shorelines and in low-lying spots, or in areas farther inland near where higher surge waters move ashore.

– Minor to locally moderate damage to marinas, docks, boardwalks and piers. A few small craft broken away from moorings.

– THREAT TO LIFE AND PROPERTY THAT INCLUDES TYPICAL FORECAST UNCERTAINTY IN TRACK, SIZE AND INTENSITY: Potential for moderate flooding rain

– PLAN: Emergency plans should include the potential for moderate flooding from heavy rain. Evacuations and rescues are possible.

– PREPARE: Consider protective actions if you are in an area vulnerable to flooding.

– ACT: Heed any flood watches and warnings. Failure to take action may result in serious injury or loss of life.

– Rivers and tributaries may quickly become swollen with swifter currents and overspill their banks in a few places, especially in usually vulnerable spots. Small streams, creeks, canals and ditches overflow.

– Situation is somewhat favorable for tornadoes

– THREAT TO LIFE AND PROPERTY THAT INCLUDES TYPICAL FORECAST UNCERTAINTY IN TRACK, SIZE AND INTENSITY: Potential for a few tornadoes

– PLAN: Emergency plans should include the potential for a few tornadoes.

– PREPARE: If your shelter is particularly vulnerable to tornadoes, prepare to relocate to safe shelter before hazardous weather arrives.

– ACT: If a tornado warning is issued, be ready to shelter quickly.

– The occurrence of isolated tornadoes can hinder the execution of emergency plans during tropical events.

– A few places may experience tornado damage, along with power and communications disruptions.