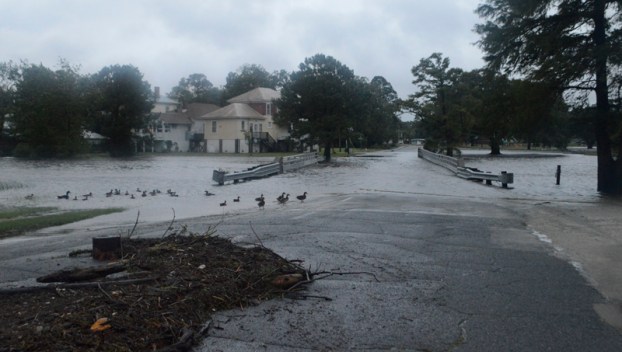 While downed trees and power outages were the biggest issues for most local municipalities, an apparent tornado may have passed through a community east of Bath, and Belhaven and Washington both saw some flooding in their respective downtown areas as Tropical Storm Isaias passed over Beaufort County on Tuesday.

By early Tuesday afternoon, Bath Town Manager Bubs Carson says town staff had already cleared out a large portion of the debris that accumulated in the town. He said that the town was fortunate that there wasn’t more damage than there was. The biggest impacts were actually about four miles east of Bath, in the Rest Haven subdivision, where a tornado may have damaged homes.

“There’s extensive damage in that area, a lot of trees down and a lot of homes damaged, as you would expect with a tornado,” Carson said. “That is the most damage, by far, in the Bath community.”

According to Belhaven Town Manager Lynn Davis, a number of downtown businesses were flooded as the Pungo River rose above its banks. According to the National Weather Service, the river peaked at three feet above normal, placing it in a minor flood stage.

“The water was higher than we anticipated,” Davis said. “Some of the businesses have reported, in our downtown, that they had between nine and 12 inches (of water). There are crews on hand already cleaning that up.”

Aside from the water downtown, Davis said the town suffered some damage to its utilities infrastructure, and had a number of roads that were impassable Tuesday morning. She said there was no significant damage to homes in town.

While storm surge washed over Stewart Parkway and much of the Washington waterfront early Tuesday morning, City Manager Jonathan Russell says the storm didn’t cause much in the way of flood damage throughout the city.

“I think the staff did a great job of addressing things last night,” Russell said. “We tried to pump down the Jacks Creek basin as low as possible to absorb storm water as it came in, and then we had a little bit of storm surge on the waterfront. I’m not aware of any significant property damage due to flooding. We did have a few downed limbs and trees that caused power outages on a few circuits. … I think it was a little larger than everyone anticipated, but I think we handled it well.”

According to Chocowinity Mayor Jimmy Mobley, the biggest impact of the storm there was downed trees and limbs, with the occasional piece of siding coming off of a residence. Though the town lost power around 1 a.m. Tuesday, generators kicked in and kept the town’s water and sewer systems functioning. Overall, he said there were no major damages.

Aurora too was spared any major damages from the storm, according to Mayor Clif Williams. Though most of the town did lose power overnight, Williams said it was quickly restored Tuesday morning.

“We were very fortunate,” Williams said.

Overall, Washington Park Mayor Tom Richter says the town “got off light” when it came to damages from Isaias. For the most part, scattered debris and trees were the biggest issue there, and the eastern side of the community regained power after 6 p.m. Tuesday. He said he had not heard of any homes being flooded or trees coming down on buildings.