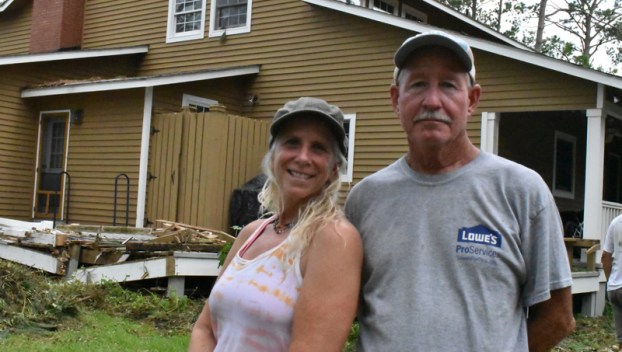 HELPING HANDS: Neighbors Robyn Yigit Smith and Martin Webb were in contact immediately after a tornado hit the Rest Haven community early Tuesday morning. Webb soon had contractor friends on the phone to help provide the manpower necessary for cleanup. Both say a close sense of community in Rest Haven will help residents through the hard work ahead. (Matt Debnam/Daily News)

BAYVIEW — Residents, contractors and volunteers were hard at work Wednesday, cleaning up the devastation left behind in the wake of a tornado that damaged trees and homes in the Rest Haven community, just east of Bayview.

The National Weather Service at Newport/Morehead City confirmed that an F1 tornado passed over the community at around 12:50 a.m. Tuesday morning, as Tropical Storm Isaias tracked through eastern North Carolina. Estimated maximum wind speeds for the tornado may have reached as high as 105 mph.

While no one was injured by the tornado, Beaufort County Emergency Services Deputy Director Chris Newkirk estimates that more than 20 homes, all occupied, were damaged during the tornado’s passing, mostly by falling trees and strong winds.

Steve Smiley Sr., who has been coming to his family’s river home at Rest Haven all his life, was there with two of his grandchildren and a friend of theirs on Tuesday night when the tornado struck. He recalls being awoken by a lightning strike, then hearing a loud crash as a tree fell into the kitchen of his family’s 74-year-old home away from home.

“We were expecting a tropical storm or category 1 hurricane,” Smiley said. “We’ve been through a dozen of them. (The tornado) jumped over us. If it had been on the ground, there would be bodies here. As it was, it was above us, and it twisted the tops off of scores of hundred-foot pine trees around us.” 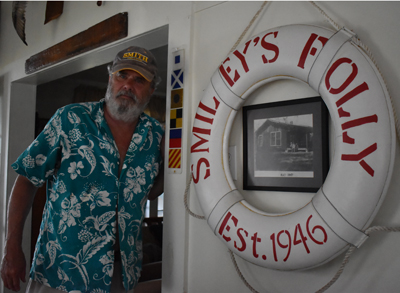 FAMILY TRADITION: Steve Smiley Sr. has been coming to his family’s river house at Rest Haven his entire life, and now enjoys spending time there with his adult children and grandchildren. Like many of the community’s founders, his father, Wendell Smiley Sr., built the house from surplus military supplies after World War II, on a $400 lot purchased from Beaufort County farmer Foy Mason. (Matt Debnam/Daily News)

At the same time, neighbors throughout the community shared a similar experience. One of them was Robyn Yigit Smith, who was at her parent’s house with her children, her ex-husband, her 81-year-old mother and the family dogs.

“As soon as the light came up that morning, we all walked out, and I saw Martin (Webb) coming across with another neighbor,” Smith recalled. “Martin and I looked at each other, and we were still white as ghosts. The neighbor said, ‘If that didn’t scare you, something’s wrong with you.’ We were all still shaking. The light was so dim, and you looked around, and it looked like a war zone, like you can’t even imagine where to begin.”

Fortunately, for the community as a whole, Webb, a year-round resident of the community, already had the ball rolling on picking up the pieces. By 3 a.m. Tuesday morning, he was on the phone with friends in the contracting business. He called Scotty Mason, with Cutler Landscaping, Gerald Selby, with Selby Land Concepts, and Jason Biggs, with Biggs Land Development.

“All three of these guys dropped what they were doing and came to help get us out of this mess that we’re in,” Webb said. “They’ve been here two days, and they’ll probably be here another five days.” 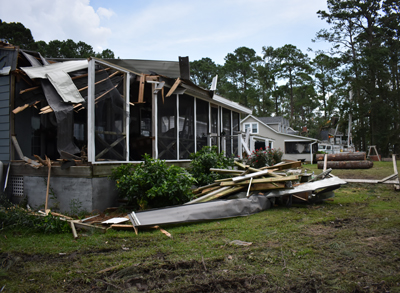 EXTENSIVE DAMAGE: Broken pine trees and strong winds caused extensive damage to many homes in the Rest Haven community early Tuesday morning when a tornado spawned from Tropical Storm Isaias passed over the community. Had the tornado touched down in the community, residents say the damage could have been far worse, possibly accompanied by a loss of life. (Matt Debnam/Daily News)

“Literally by 8:30 in the morning, I started hearing chainsaws and the sounds of trucks backing up,” Smith added. “I started seeing backhoes coming in, and I’ve never seen anything like that, and it’s because Martin got on the phone. Even though they had a lot of jobs right now, they were able to stop those, and I think even their clients understood and said, ‘That’s OK.’ These people are amazing. I can’t say enough about that.”

As a community, Rest Haven is a place where generations of families have found rest and relaxation together, bound by a common love of the Pamlico River. Through decades of community worship services, picnics and friendships, the residents of the community have grown ever closer together. For Smiley, Smith, Webb and their neighbors, it’s that sense of community that will help Rest Haven heal.

“You feel it all the time, but you see it when you come together to clean up after a storm,” Smith said. “It’s palpable, and you can see it. Martin called me and my family within minutes of this tornado passing, and I knew all night that he was sitting there texting me, making phone calls to people and getting the cleanup going. The moment when you feel the least hope, when you walk out of your door after a storm and you look and you want to fall down and weep, the community comes together. You are suddenly reminded of what you’ve got here.” 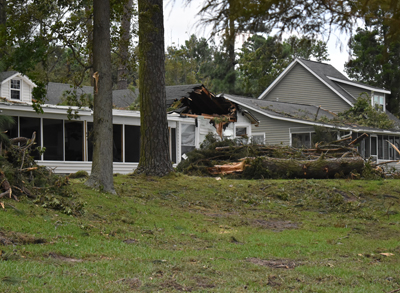 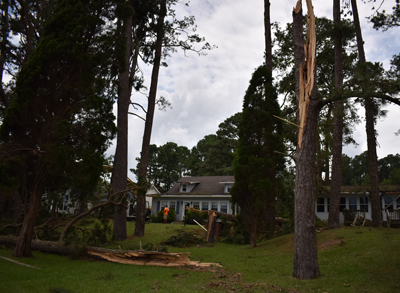 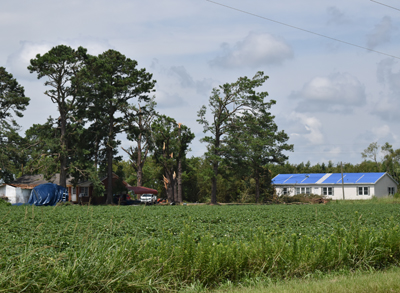 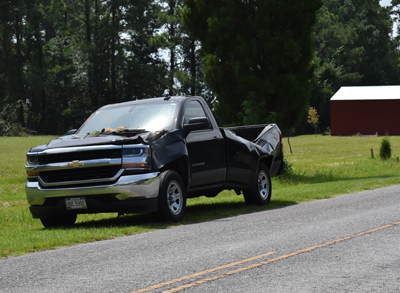 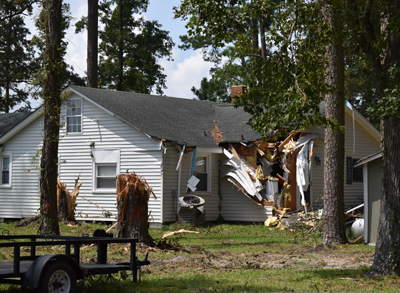