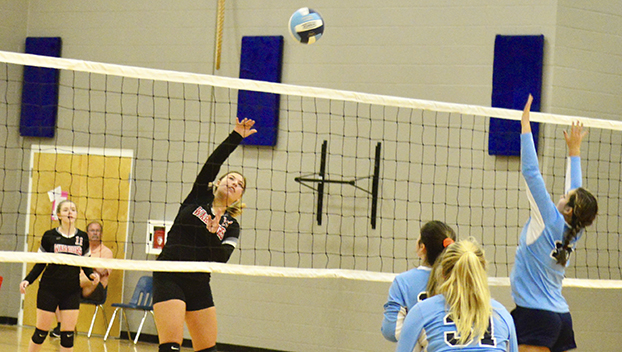 Since neither school is in a conference or part of a state association, the regular-season finale was the last match — no conference tournament; no state playoffs.

Both sides finished with a successful season, according to the coaches.

“This is the first time in our five years of having volleyball that we’ve had double digits in victories,” said Unity coach Derreck Edwards, whose team finished 10-5. “We’ve managed to field a middle school, junior varsity and varsity team through very difficult circumstances, so we feel really good about how our season turned out.”

The effects of COVID-19 was felt throughout the match, which didn’t start until shortly before 9 p.m. The Montessori after-school program doesn’t end until 6 p.m., which normally wouldn’t be a problem, but the coronavirus has forced the group to move to a larger space (the gym) to enforce social distancing. Volunteers have to clean the facility before players and fans can enter, so the middle-school match couldn’t begin before 6:30 p.m., followed by the JV game. 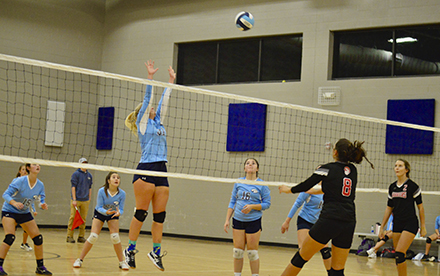 The crowd of about 50 people was spaced throughout the bleachers and some fans wore masks. The traditional high fives and hugs after good plays were replaced by the occasional fist or elbow bump, and the teams didn’t switch sides after each set. They also gave a casual wave to each other instead of going through the post-match handshake line.

“There’s no doubt that it’s been a different season,” said Montessori coach Tony Alligood, whose team finished 6-3 with all three losses to the Warriors. “Since we are a public charter school, it’s been hard to find opponents who were ready to play when school started. We’ve had eight varsity players for most matches, and none are seniors. The girls have done a great job in practice, and all of them have improved.”

Unity jumped out to an 8-4 advantage in the first set, before the Eagles came back with four straight points to tie. The Warriors seized control behind strong serving from Kate Ryley to lead 19-12 on the way to a 25-16 final score.

The final set was the most competitive and entertaining as players on both sides kept the weary crowd interested with diving saves, multiple back and forth volleys and several well-struck kills. Unity led 12-10 and 19-18 when sophomore Carly Harbrige stepped on her teammate’s foot and injured her ankle, forcing her into a cheerleading roll on the bench. The Eagles rallied to tie at 19 and 21 before the Warriors closed it out, 25-23.

“Losing our best player (Harbrige) made it tough at the end, but I’m proud of the way our girls stepped up,” said Edwards. “Montessori always fights hard, and they made us earn it tonight. They are much-improved, and we’ll have some more tough matches with them in the future.”

Edwards loses three seniors, Caitlin Lynch, Catherine Cutler and Sarah Sottile, while the Eagles return everyone plus those moving up from the JV.

“I think I can speak for both of us when I say we are just grateful to play a season,” Eagles coach Tony Alligood said. “We have nothing to hang our heads about, and I’m proud of our team.”