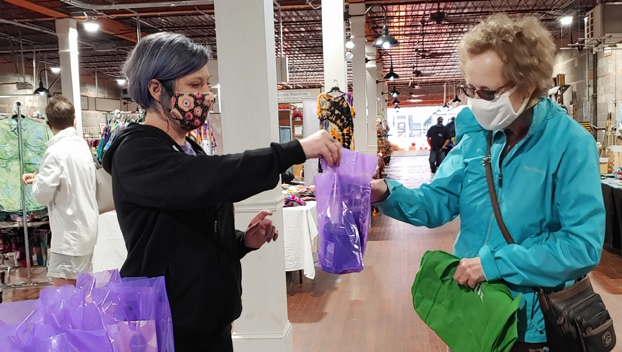 For the Daily News

Jessica Yoder, shelter manager since 2019, said this week that domestic violence is a timeless problem, but protection and recovery options have changed as fast as the ways a girlfriend, fiancé, partner or spouse can become a victim.

“We have resources for all of those. Even if you don’t need a shelter, you can call us. We can talk you through things over the phone. Ruth’s House and places like it are not just for people who need shelter,” Yoder said. 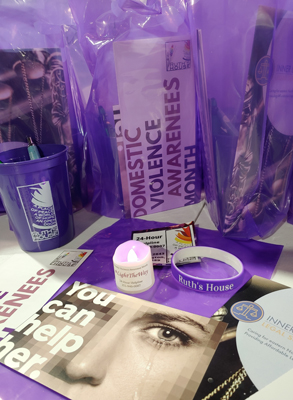 INFORMATION STATION: Goodie bags full of helpful information about domestic violence are part of efforts by Ruth’s House to inform local residents during Domestic Violence Awareness Month. Some are still available being given away by Inner Banks Legal Services, which is located at 130-A E. Second Street in Washington.

“People call us who need the shelter, but we miss people who just go to their mom’s or sister’s houses while an incident is happening,” Yoder said. “We can help them find a way to better protect themselves and their children. My message is that they don’t necessarily have to come to the shelter. We are an all-encompassing resource.”

Some of those resources include the informative pamphlets distributed this weekend at the Harbor District Market as part of Domestic violence Awareness Month. Goodie bags handed out also contained tiny battery-operated lights, featuring the domestic violence awareness signature color of purple. These will serve as a pandemic-related substitute for the candle light vigil previously held at the Court House. 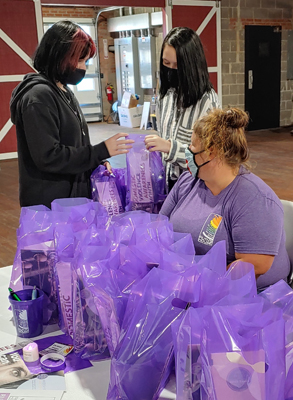 “We normally have candles lit for each person who died that year,” Yoder said. “This time, we are asking everybody to put one of these electric ones in their window or on their desk. Please take a picture of it and post it to the #lighttheway Facebook site, then tag us at Ruth’s House to show unity for our victims.”

Yoder said another way to observe ‘Purple Thursday’ on Oct. 22 is to wear something that’s purple, even something as simple as a fingernail polish accent, to remember the people and hurting because of domestic violence.

According to statistics for 2019, Ruth House handled 222 crisis line calls, escorted 58 domestic violence victims to court, assisted 25 of them with protective orders and provided shelter to 24 adults and 18 children.

Yoder said it’s too early to publish 2020’s figures, especially related to extra services needed due to the stresses of being cooped up with an abusive person during COVID-19 isolation situations.

One local woman, however, did not survive to even see pandemic-related issues in 2020. Alicia Marie Morgan lost her life during a domestic violence situation on Jan. 21, after being stalked, threatened and harassed by her ex-boyfriend, who refused to accept her decision to end their long-term relationship. 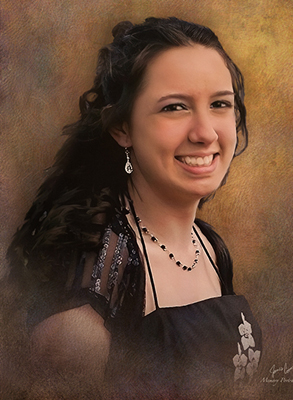 TRAGIC LOSS: Donna Morgan Cabe, mother of domestic violence victim Alicia Marie Morgan, shared this photo as part of the effort by Hillside Funeral Service to sell commemorative T-shirts in Morgan’s honor and to raise awareness about the dangers of ignoring early signs of domestic abuse. Funds from the sale of the T-shirts will be donated to Ruth’s House domestic violence shelter.

A town-wide effort has sprung up in her memory to make sure that her death becomes a teaching tool, that her life is remembered with love, and that Ruth’s House can continue as the beacon of hope she would want to preserve for future domestic violence victims.

According to a Facebook post by Washington Funeral and Cremation, Morgan had maintained a platonic relationship with him so their son could have contact with his father. According to the post, the ex-boyfriend forced Alisha to drive to his residence, where he took her life and then his own.

“She was a beautiful and happy young woman who was just beginning her life… a young mother… a daughter, a sister, a granddaughter, cousin, friend,” the post reads. “The sting of her loss, the silence of her voice, and the questions of ‘why’ and ‘could I have done more’ are forever embedded in our hearts.”

The extent of the family’s grief and their efforts to support Alisha’s wider circle of friends touched the staff of Washington Funeral and Cremation so deeply that they asked them for permission to make commemorative T-shirts in her honor, for family and friends. Alisha’s cousin Brandy created the design. 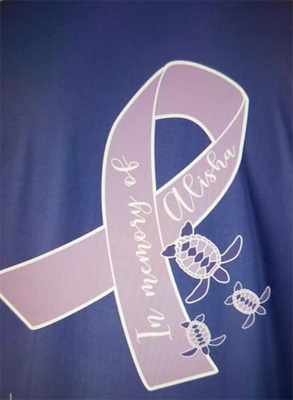 IN ALICIA’S MEMORY: This T-shirt is being sold to raise donations for the Ruth’s House Women’s Shelter. Each person who buys a shirt will also receive a free #lighttheway package created by Ruth’s House and Inner Banks Legal Services.

“The staff fell in love with her heartfelt gesture so much that we decided to offer the T-shirts to the public as well… for a minimum $20 donation (which) will all be donated to Ruth’s House in memory of Alisha,” according to a post on funeral home’s web site by funeral director Christie Noe.

More than 20 of the 80 shirts ordered were reserved within three hours. The shirts are expected to arrive in time for Purple Thursday, and those interested in owning one or more may reserve them by emailing christie@washington-funeral.com or calling 252-975-4500 and leaving her a message. Required information and payment options can be found on the Washington Funeral and Cremation web page.