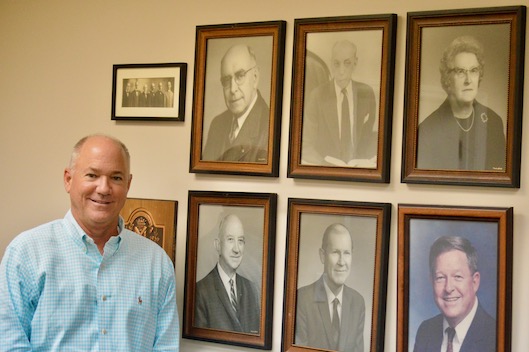 At least three Beaufort County businesses have been around for over 100 years. We profiled 107 year old Alligood’s garage last Wednesday, then told you about Stewart’s Jewelry Store (112) Saturday. It’s big brother’s turn today, as Bragaw Insurance has thrived for 132 years.

You can excuse a 132 year old for a bit of a convoluted family history. The beginning also requires some imagination.

The year was 1888 and 22 year-old Washington native William Bragaw was ready to go into business. For reasons unknown, he settled on the combination of insurance and fertilizer.

Imagine a conversation between the salesman and a farmer who was buying fertilizer and was worried about his financial well-being if his tobacco, cotton or another crop was ruined. William could have put his mind at ease with an offer to pay him $100 if there was no crop in return for a $10 “insurance policy” payment. Sign up 10, 20 or 50 more farmers and you have a business.

“It’s probably not that much of a stretch to think that’s how it could have begun,” current president and fourth generation operator Walker Lynch said. “We don’t know for sure the thinking behind how we started but taking care of our customers has always been the top priority.”

Edmund Harding joined the business in 1924 after marrying William’s daughter. A natural extrovert and story-teller, he gained a reputation as a homespun philosopher and traveled to all 50 states giving humorous after dinner speeches to groups of all sizes. In the 1950’s, Harding led the movement to turn the town of Bath into a historic site so it could be renovated and preserved. A historical marker at the corner of W. Main and Washington St. near his home was dedicated in 2019 to honor his achievements.

All his extra obligations took Harding away from the family business, so his brother in law, Julian Davenport, took over operations in 1953, then turned it over to Bud Lynch in 1961, who had married Harding’s niece, Alice Walker.

1961 also happened to be the year the current company president Murray Walker Lynch was born.

“I basically grew up around the business,” Walker Lynch said. “My mom helped run things as an officer, so there was always business talk going on. I can remember my dad waking me up in the middle of night lots of times when we heard the fire horn go off. He would figure out what area of town it was in and we’d go find the fire. More often than not, it would involve a customer and my dad was right there assuring them that their loss was covered, and things would be okay. That left a huge impression on me as far as how to provide the best customer service.”

Lynch graduated from N.C. State and knew he would come back to work with his dad but had some oats to sow first.

“My buddy and I took off in his pick-up truck and were gone for two months until we ran out of money,” Lynch said. “We traveled through the South to get to California, then took the northern route home. We slept in the back of his truck and took showers at the local YMCA’s when we could find one. It was a great trip and allowed me to get my mind right to come back and go to work.”

Father and son worked together until the elder Lynch died in 1995.

“He was my mentor and taught me most of what I know,” Walker Lynch said. “He also strongly encouraged me to become educated in the ways of the business, so I became a Certified Insurance Councilor.”

Lynch leads a company that has relationships with approximately 25 regional and national carriers to find the best coverage at the best price for their customers.

“We’ve always been independent, so we work for the customer, not the company,” Lynch said. “We are selling a promise that we will be there when our customers need us, usually after something bad happens. We’ve delivered consistently and that’s why we’re still here after all these years. My dad also taught me early that having a great team of co-workers is vital to survive. They’ve been a great asset over the years, and we are grateful for them.”

At 58, Lynch is not ready to retire, but said the business will continue when he is. With a son and two daughters, he has options.

“There’s no way this is ending on my watch,” he said with a laugh. “I don’t know for sure who is next just yet, but I think we’ll be in good hands.”