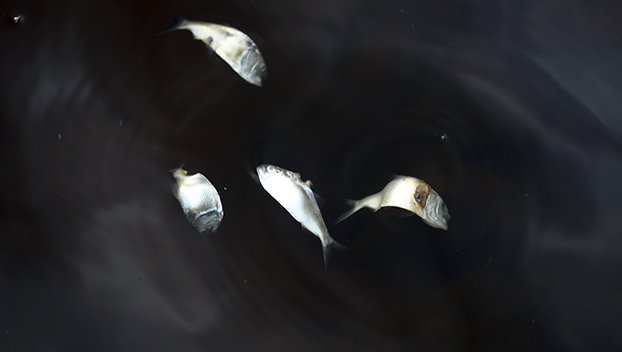 ON THE RIVER: Dead juvenile menhaden have been the subject of several recent reports of fish kills in local waterways. (Sound Rivers)

Reports of multiple, ongoing fish kills in the Pamlico and Neuse rivers are raising concerns about water quality.

This week, reports of fish kills came from different areas on the Pamlico River, at Goose Creek State Park and in Bath Creek; on the Neuse, reports have been coming in for several weeks, according to Jill Howell, Pamlico-Tar riverkeeper.

“There’s been an ongoing fish kills (on the Neuse) for four weeks now, which is way longer than a fish kill should last, and longer than they usually last — thousands and thousands, of dead menhaden,” Howell said.

The slime mold A. invadans could be the reason behind the fish kills, as well as recent weather.

“We know that part of it is due to this really warm weather we’re having and lots of rain flushing into the river,” Howell said. “The excessive nutrients (in the runoff) are causing algal blooms which are depleting the oxygen and suffocating the fish.”

“If there’s an active or ongoing fish kill and you can see dead fish in the water, you should not be in it, because of exposure to bacteria,” Howell said.

While fish kills affecting mainly juvenile menhaden have been a somewhat common sight in local waterways, their existence likely points to larger problems.

“People think that the fish kills are a regular occurrence, and they are, but that doesn’t mean that they should be happening. This is a sign that there are some pretty big underlying issues related to water quality,” Howell said. “The other thing that’s noteworthy on the Neuse, is it’s been dead menhaden, but there’s also been reports of dead seagulls, which is more concerning.”