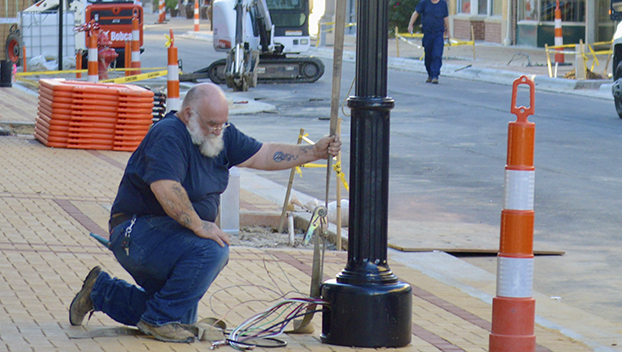 LET THERE BE LIGHT: A B.E. Singleton worker hooks up a lamppost on West Main Street.(Steve Barnes/Daily News)

In the COVID-19-induced craziness that is 2020, reopening West Main Street through downtown Washington might be the brightest spot of the year so far.

The City of Washington started the planning phase of the Streetscape project in 2016, adopted the master plan in September 2017, approved the design in 2019 and awarded the contract to B.E. Singleton and Sons of Washington in March. Construction started at the end of March and will be completed before the end of this month.

“We are definitely headed down the stretch and the end is in sight,” Washington City Manager Jonathan Russell said. “We are in the last 5 to 10%, and we are completing things every day. We are hoping to be basically finished the 18th, 19th or 20th. There will be some finishing touches after that, but the road should be open and everything else should be pretty much in place.”

Construction crews were busy installing lampposts earlier in the week, with trees, benches, bike racks and trashcans to follow quickly, completing a transformation that might provide a silver lining in the COVID cloud.

“This timeframe turned out to be even less disruptive to our downtown businesses since they had to close because of COVID,” Russell said. “We actually started three days early and have stayed on schedule, for the most part. I certainly hope the reopening will help our folks have a strong holiday season to help them recoup some of their losses.” 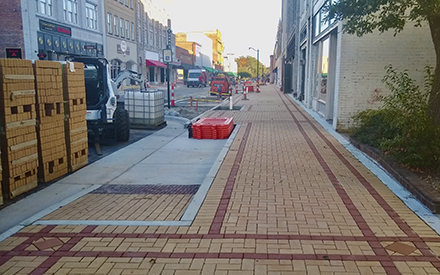 BRICK BY BRICK: West Main Street downtown should be open for foot traffic within the next two weeks.

Russell said about two-thirds of the $3.4 million project was spent underground on a much-needed upgrade to 50-year-old water and sewer pipes and burying overhead power lines.

“We did run into a few unforeseen challenges with the underground piece,” Russell said. “We knew we were going to have surprises, we just didn’t know where. The Singleton guys did a great job of figuring it out and keeping the project on schedule.”

In addition to the utility upgrades, one of the project’s goals was to make West Main Street more pedestrian friendly. Wider sidewalks paved with distinctive tan bricks, trees and places to sit should check the box.

“I think it is going to look great and all of us downtown will be happy when it’s done,” Art Tyndall, operator of Art Tyndall Studio said. “I think business will be up by 25% or more because people want to go downtown. They are just tired of going in the back door and ready to go in the front.”

Russell credited the city staff and planning department along with Public Works Director Adam Waters for keeping the project on track.

“Those guys were down there every day dealing with whatever they had to handle,” Russell said. “It was a unique project with a lot of moving parts. There were some stressful times, but I think everyone will be impressed when they see it. Finishing this project should help raise awareness of Washington to travelers and increase our foot traffic downtown.”

Washington’s late mayor, Mac Hodges, was one of the driving forces behind the project. He could be seen most days walking up and down Main Street, watching the redevelopment unfold. Hodges died in mid-August, and Russell said the city will honor his contribution.

“I think he would be really proud of what it’s going to look like, and we are all really sad that he’s not here to see it,” Russell said. “We’re planning on having Mac’s wife, Lou, and his family take the first ride down the street after it opens. I think he would like that.”