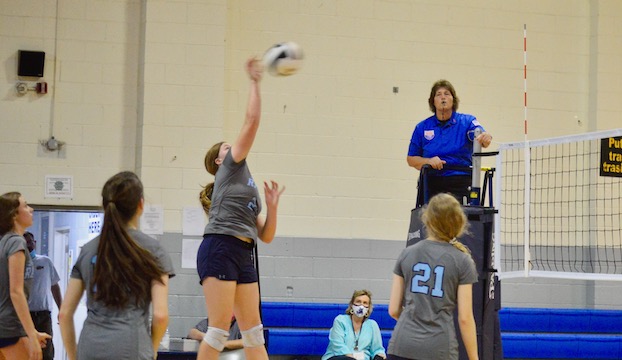 It’s a good week to be a Raider.

Stoop and Williams led PCA to the 1A volleyball final four, where they lost their first match of the season to eventual state champion Lee Christian School of Sanford. Stoop earned her second-straight All-state selection, while Williams made the 12-person team for the first time.

“Both of them played a huge role in our success this fall,” said coach Melanie Eddleman, whose team finished 13-1. “Reagan is a very hard worker and improved her game in all areas. She is a powerful hitter and will continue to get better. Emma is an outstanding setter and was one of our best servers. She was an excellent leader for us, and it’s great she made All-State as a senior. We will miss her next year.”

Williams, along with classmates Riley Cutler and Lauren Ricks, helped the Raiders win two matches in the state tournament in each of the last three years. Stoop led the team with 141 kills, 134 serving points and 75 aces. Williams had a team-best 100 assists.

Meanwhile, the football team was supposed to start playoff action at home Saturday afternoon against Lawrence Academy, but they will travel 40 miles to Merry Hill to meet the Warriors under the Friday night lights at 7 p.m.

PCA (3-1) is coming off a 56-12 loss to Wayne Christian in Goldsboro. The Raiders had two other games canceled because of COVID-19 concerns.

The game was tied 8-8 after the first quarter, but Wayne Christian broke it open with 32 points in the second quarter. They are 2A, but have one homeschooled player, so they can’t compete in the playoffs.

“I hope it’s a little bit of a wakeup call before the playoffs,” Raiders coach Stacey Keech said. “It should redirect their attention a little bit. We had a couple of linemen out with injuries and a couple others were under the weather with asthma. Our backups played quite a bit, and everybody kept fighting. We only gave up two touchdowns in the second half, so that should help our confidence for Lawrence.”

“They will know about him for sure, but we’ve improved by getting more people involved in our offense,” Keech said. “We have more weapons than just him, but we also know they have improved as well.”

It might seem strange to have to travel for the playoffs after winning the conference title, but Lawrence couldn’t play on Saturday and Pungo’s field does not have lights. An early Friday start time didn’t work, so the Raiders will hit the road. Keech said his team shouldn’t worry about it and just go play.

“The field is still 100 yards long, and we’ll be wearing our home uniforms,” he explained. “Our chain gang will be there and so will our P.A. announcer. I’ve never cared where I played or coached as long as there was a game. I’m planning on that attitude rubbing off on our guys.”