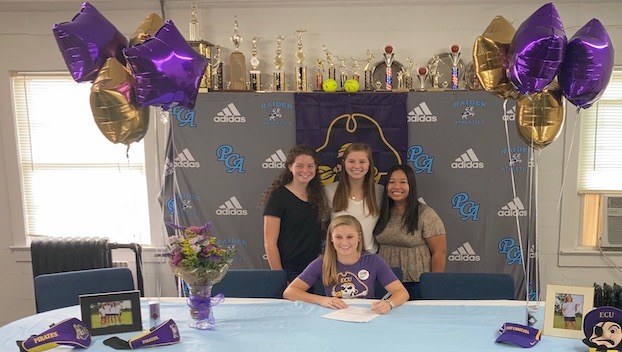 Grayson Warren’s connection to golf started when she hit a plastic ball over the roof of her grandparents’ two-story house. She was seven.

Wednesday, the Pungo Christian Academy senior signed a national letter of intent to play her chosen sport at East Carolina University, wrapping up 11 years of working toward her goal and marking the beginning of a new journey.

“I’m happy, excited and relieved, all at the same time,” Warren said. “I’m overwhelmed by all the support from my teammates, friends, family, teachers and everybody else gave me at the ceremony. I really appreciate everything they’ve done for me, and I’m looking forward to playing college golf.”

Warren’s grandfather, John Shook, introduced her to golf in the backyard of his Cypress Landing home. One day, plastic club met plastic ball, and the bond was instant.

“There’s nothing like the feeling of hitting a good shot,” Warren laughed. “I was really excited, and so was my grandpa. He bought me my first set of real clubs — Top-Flight, I think — a couple of years later when I was 9. I made my first par with those clubs.”

She has advanced from there with her first (and only, so far) hole-in-one during a tournament at the University of North Carolina-Finley Golf Course in Chapel Hill two years ago.

“It was a seven iron from 135 yards into the wind over a pond,” she explained. “I was super-excited after that one.”

Serious dedication to the sport began when she moved from Bath Elementary to PCA to play on the boy’s golf team when she was 12.

“None of the schools had girls golf, and Pungo let me play with the boys,” Warren said. “That’s when playing golf in college became a goal. I knew I needed to play as many competitive matches as I could.”

After middle school, Warren found her competition by playing summer tournaments with the Carolina Golf Association and the Peggy Kirk Bell tour because PCA didn’t have a varsity girls’ team. Raiders athletic director Logan Van Staalduinen wanted to change that and encouraged Warren to find three other girls to form a team for her senior year and hopefully beyond.

“We were planning it when COVID shut everything down back in the spring,” Van Staalduinen said. “I knew Grayson could pull it off if she had enough lead time, and she did.”

Fellow senior Kayla Tran, junior Cora Blaine Noble and freshman Jenny Grace Pugh joined Warren, who ended up finishing in a tie for second in the NCISAA state tournament last month, one shot behind the leader.

“It was really fun to play as part of a team,” Warren said. “Golf can be a lonely sport, and it was great to have them out there with me. It motivated me to keeping working to play on a college team.”

Warren’s connection to ECU golf, ironically, came at Duke University. She started attending the Blue Devils’ summer golf camps when she was 12 and met former Pirates coach Kevin Williams, who led the program for 17 years before he left for an assistant spot on the South Carolina coaching staff two years ago. Warren also met current Pirates coach CC Buford at those camps.

“She’s very dynamic and will help me improve my game and mature as a person,” Warren said. “ECU has always felt like home, and I said ‘yes’ as soon as they told me they wanted me. My family has gone to football games there my whole life and to get the chance to play golf there is a dream come true.”