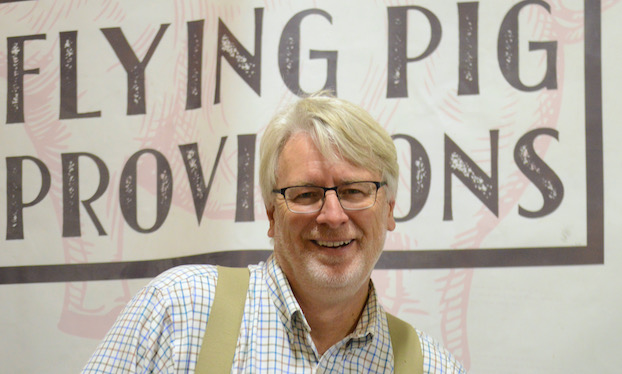 STRONG OPENING: Jeff Furst and his wife, Linda Harrington, opened the store two weeks ago and Furst says they are off to a flying start.

It’s hard to think of downtown Washington as a food desert with several restaurants and the Harbor District Market right there on Main Street.

However, until two weeks ago center city residents, boaters and forgetful cooks had nowhere to buy milk, eggs and bread along with other staples.

Jeff Furst along with spouse Linda Harrington and business partner Brent Ottaway are aiming to change that situation with Flying Pig Provisions, a combination general store and gift shop that opened November 14th next to Scoops Ice Cream Shop on Main Street.

The trio bought the three-floor, 9,700 square foot building in September of 2016, with Scoops already operating on one side of the bottom floor. Two new apartments, both leased, make up the second floor with the third story still to be developed.

Furst grew up in the small northwestern Pennsylvania town of Corry, just south of Lake Erie. His older brother attended UNC-Chapel Hill and Furst followed him to North Carolina in the mid 80’s. He and Harrington settled in Raleigh and spent five years traveling across the state scoping out potential spots to slow down, but not retire. They moved to Washington in early 2014 and found opportunities.

“We knew we were going into some kind of business,” Furst said. “The Airbnb came first, and this followed. We’ve been working on this side of the building (built in 1914) for two years and we got lucky with timing our opening to the Main Street reopening. We didn’t plan it that way, but it’s worked out great so far.”

Furst and Harrington operate the When Pigs Fly Inn out of their nearby home and the general store was a natural extension of the brand.

“Before we were married, a fellow asked Linda out on date,” Furst explained. “She politely turned him down but told her friends she was thinking in her head “I’ll go out with you when pigs fly.” It became an inside joke and they have been sending her cards, shirts and whatever they can find with pigs on them as gag gifts. We thought it was a great name for the Inn and we’re hoping to advance the brand with the store.”

Furst said Flying Pig Provisions opened with three customer bases in mind-downtown residents and other locals who are looking for the staples mentioned above plus cheese, coffee, tea, jams and jellies, soap, locally produced sausage from the Craven County town of Ernul, candy to satisfy a sweet tooth, plus other cooking ingredients.

There’s plenty for tourists as well-nic nacs, hats, t-shirts and mugs with pro Washington slogans and even a pair of socks with the late Supreme Court Justice Ruth Bader Ginsburg’s likeness on them.

“This place used to be a skate shop and an aquatic pet store with live fish, tanks, food and other things,” Furst said. “We’re planning on it being the go-to spot for locals to buy staples, boaters to restock their supplies and for tourists to find unique gifts that market Washington. We are heavily invested in this community and want to do our part to help it continue to grow.”

Next on the list is a new coat of exterior paint. Soon the building will be oyster bay green with lighter trim.

“We think it will make this place look totally different,” Furst said. There’s a lot of activity on Main Street now and we are looking forward to being part of the excitement.”