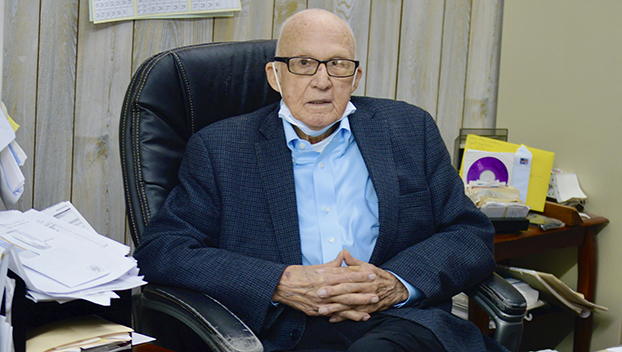 MAIN STREET PATRIARCH: Long-time Big Bargain Furniture owner Billy Jefferson died Sunday at age 87. Is this photo from November 2020, he sits behind his 60-year old desk that he bought for $25.

One of downtown Washington’s mainstays is gone. Billy Jefferson, owner and founder of Big Bargain Furniture, died at home Sunday afternoon after undergoing treatment for lung cancer for almost a year. He was 87.

Jefferson was one of Washington’s colorful characters, always ready with a story or joke to entertain customers as they browsed through his store at 120 W. Main Street. Jefferson’s jovial, downhome charm meshed nicely with his astute business sense to make his store a resounding success and himself into a Main Street mainstay.

Jefferson’s downtown roots run deep. The Washington native had worked on Main Street in some fashion for over 80 years, including a downtown paper route starting in 5th grade that included delivering the Virginian-Pilot and later the Washington Daily News.

“All of the downtown merchants will miss him very much,” Russell Smith of Russell’s of Washington clothing store said. “Not only did our stores sit side by side for 30 years, but we were also friends who saw each other every day. He was the best people person I’ve ever met, and he took the time to get to know his customers. He was slow to judge and eager to help. That’s what made him a tremendous businessman. His contributions to our community are immeasurable.”

Jefferson started Big Bargain Furniture in 1959, moved to the current location a few years later, then expanded to another storefront on the other side of Main Street after that. On warm days, folks strolling down Main Street could find him sitting in one of the rocking chairs outside his store. A warm greeting, a quip and sometimes a sale followed.

“My dad never met a stranger,” said his son, Bill Jefferson. “This store was his baby and he loved serving others. He helped a lot of people furnish their home for the first time and didn’t worry about if they could pay for it. He treated everybody the same and was always asking how he could help.”

Jefferson counted public service among his biggest accomplishments. He served on the Beaufort County Board of Education for 25 years and was involved in many other service projects.

“He was old school and hard core,” Smith said. “When he woke up, he knew it was time to go to work. He was my mentor and taught me how to treat people right. We talked about everything business-related, how to handle inventory, billing, advertising-all the things you have to get right to be successful. Nobody was on this street longer or cared about it more than him.  He touched a lot of people and Washington won’t be the same without him.”

The Jefferson family will hold a graveside service Thursday at 2 p.m. at Oakdale Cemetery. The public is welcome.