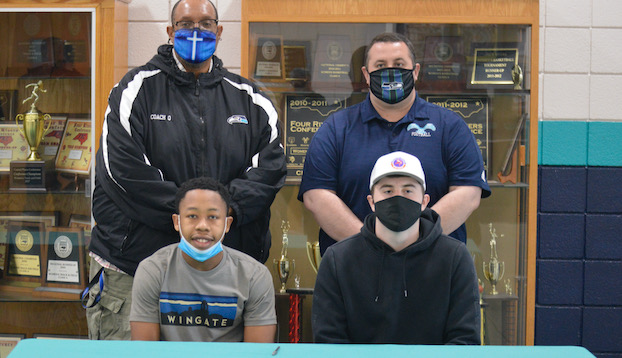 Southside’s Davion Carter and Hundley Stallings know where they will be playing next year on the eve of their senior season’s delayed kickoff.

Carter (6’0, 190 lbs.), a versatile athlete on offense and defense for the Seahawks will continue his career at Wingate (NC) University on the Division II level, while Stallings (6’2, 210 lbs.), the Seahawks quarterback will pack his bags for Missouri Valley College of the NAIA in Marshall, Mo.

“I’m really proud of both of them and it’s a reward for their hard work and dedication toward wanting to keep playing,” coach Jeff Carrow said. “Davion is our all-around best player on both sides of the ball, while Hundley has worked hard to develop his leadership skills as our quarterback. They both have great family support and mean a lot to our program.”

Carter led the Seahawks with 907 rushing yards and 11 touchdowns last season while Stallings passed for 650 yards and five touchdowns in a run-heavy offense. Cater also led the team with 89 tackles.

“I think defense is where I will fit best at Wingate,” Carter said. “I went to camp there after my freshman year and stayed in touch with them. They made me the best offer and I’m excited for the opportunity. The recruiting process was more stressful because of COVID and I’m glad to get to keep playing.”

“I was excited to get their email and then I had to go look up where they were,” he said. “It is a bit out of the box to go so far away, but it was the best opportunity of the four I had. They are going to let me compete as a quarterback, so that sealed the deal for me. I’m grateful for the opportunity and will do my best to run with it.”

The Seahawks opened their season Friday night at home against Northside. Go to thewashingtondailynews.com for complete coverage.