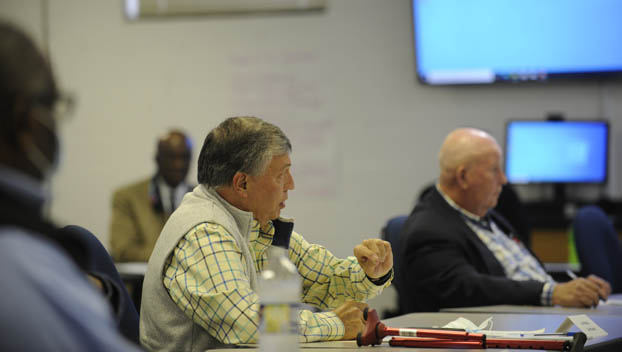 Beaufort County Commissioner John Rebholz, pictured during a meeting in March, will make a motion to dissolve the County Police Force Committee during the county commissioners meeting Monday night.

The idea of establishing a county police force will be heavily discussed during Monday’s Beaufort County Commissioners meeting.

By the end of the night, the committee tasked with researching the feasibility of that agency might not exist.  Commissioner John Rebholz will make a motion to dissolve the committee — and he anticipates that the motion will pass.

The Board unanimously approved the nominations of those three commissioners when the committee was established.

“I voted to establish the committee based on the premise that we were going to take a look at what the feasibility was and what the benefits and problems were, and maybe come forward with a recommendation,” Rebholz told the Daily News. “Since that time, it has become very clear to me and other people that the whole purpose of this is to take away the citizens’ right to vote on the sheriff.

“This is a vendetta,” he added. “The motivation is not to take a look at this and assess it, but simply move forward with a change to a county police force.”

Rebholz anticipates that his motion will pass 4-3, with the committee members voting against it.

Two committee meetings have been held since the group’s inception. Gaston County is the only North Carolina county with a county police force, so the committee has been studying Gaston’s model.

The committee is expected to eventually report its findings to the rest of the commissioners. Special legislation would be needed in order to establish the police force as the county’s primary law enforcement agency, as Richardson noted previously. In Gaston County’s model, the county police department handles law enforcement but the Sheriff’s Office still exists, and is tasked with handling security and management duties relating to the courthouse, detention center, firearm permit administration and other areas.

“This sheriff has not done you justice,” Richardson told those in attendance. “He is not providing the service to the county that he should be providing. He is autocratic and dictatorial. He has mistaken his standing in the constitution  — which every elected official has a standing in the constitution of the state of North Carolina, so the sheriff is nothing special. He’s just like the rest of us; he’s elected.”

Rep. Keith Kidwell’s name has been brought up several times in county police force discussions, specifically in reference to local legislation potentially being introduced. Kidwell said a lot of the information being passed around regarding his stance on the Sheriff’s Office and county police force is incorrect. Kidwell will attend the meeting Monday night, where he dispel rumors and explain his views on those topics.

On March 25, Beaufort County Sheriff Ernie Coleman published a statement in which he commented on the county police force discussions.

“As far as a county police department, it would also take special legislation from the state legislature that would give Beaufort County permission to have a county police department,” the statement reads in part. “I have spoken with Representative Keith Kidwell and he advised me that Hood Richardson spoke with him about this. Representative Kidwell advised me that he told Commissioner Richardson that under no circumstance would he sponsor such a ridiculous bill. The chances of a bill of this magnitude getting through the legislature is practically 0%.”

Monday night’s meeting will begin at 5:30 p.m. in the boardroom located at 136 W. Second St. in Washington.