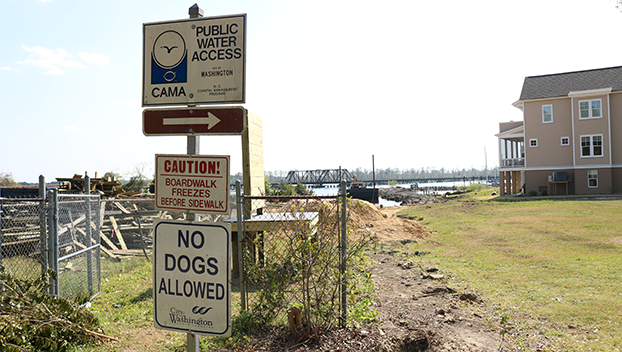 REBUILDING: The entire boardwalk along the Pamlico River will be rebuilt on the same footprint. Construction is currently underway to replace the boardwalk from the public access point along Water Street and should be completed in April or May. (Chelsea Hofmann / The Washington Daily News)

East end of boardwalk under construction

Construction is underway on phase one of the city’s boardwalk project to improve and widen the current structure.

“It’s replacing the boardwalk that currently exists because it has aged out of its usable life and it’s having safety issues. We’re starting the replacement and we’ll be widening it approximately 10 inches,” said Jonathan Russell, the Washington City Manager. “It will be going back on the same footprint that was existing but we are replacing the entire boardwalk with the frame and all the flooring so it will essentially be a new boardwalk when it’s complete.”

Phase one impacts the east end of the boardwalk, which is located closest to the previous site of Builders FirstSource building and the future Moss East development. Phase two will cover the remaining half of the boardwalk and will be completed next year.

The project is being funded by the City of Washington through a grant from the Coastal Area Management Act under the North Carolina Department of Environmental Quality. Funds are provided by the North Carolina Parks and Recreation Trust Fund to improve access for pedestrians to state beaches and waterways. The estimated cost for phase one of the project is $388,000, with $200,000 being provided by the city and the remaining amount covered by the CAMA grant.

“It was voted on a year or so ago and then we went through the CAMA permitting phase and approval and final design. Construction started a few weeks ago and we’re looking at a 60 to 75 day construction period so we’re looking at an April or May completion date,” Russell said.

Cost estimates for phase two are similar to phase one. Russell hopes for both phases of the boardwalk reconstruction to be completed at some point next year.

“It’s not changing any of the public accessibility or access. The city will still own and maintain the boardwalk and we’re looking forward to opening it. It should be a little more enjoyable because it will be wider,” Russell said.

The east end of the boardwalk will remain closed until construction on phase one has been completed.