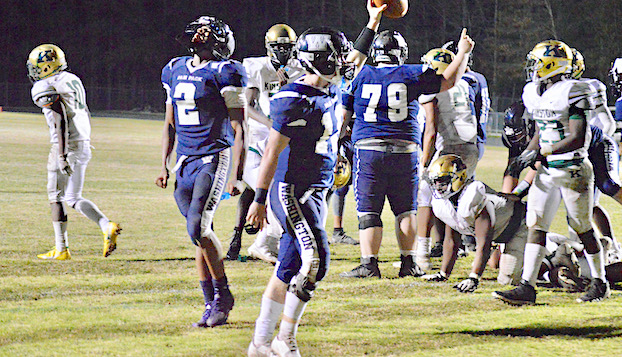 Washington High School drew the top seed in the 2AA football playoffs and have home field advantage until the state championship game.

The Pam Pack (5-1, 5-0) won the Eastern Carolina 2A conference title in thrilling fashion Thursday with a 50-49 come-from-behind overtime victory over Kinston. They will host South Granville, (5-1, 5-2) the second place team in the 1A/2A Northern Carolina conference.

“They run the triple option from under center and will be a challenge to defend,” Washington coach Perry Owens said. “They have a history of successful teams and the playoffs are almost a second season. Mistakes are magnified and the stakes are higher. There are no easy wins, because only the top eight teams got in.”

The Eagles average 34 points a game and are coming off a 71-26 victory at South Granville. They are a ground-oriented offense built around 5’7 200 lb. junior Micah Wilkerson who has 1,217 yards rushing and 15 touchdowns.

“The win over Kinston helped us improve our poise,” coach Perry Owens said. “We were down because of our own mistakes, but had the ability to make adjustments, settle down and do our jobs. That will help us the rest of the way.”

The action begins Friday at 6:30 at Wagner Stadium.

“It’s always great to play at home, but especially this year because four of the teams in our bracket are two or three hours away. The ride takes a toll on the players and it’s easier to schedule our pre-game routine when we are home.”