Coyote activity to increase as weather warms up 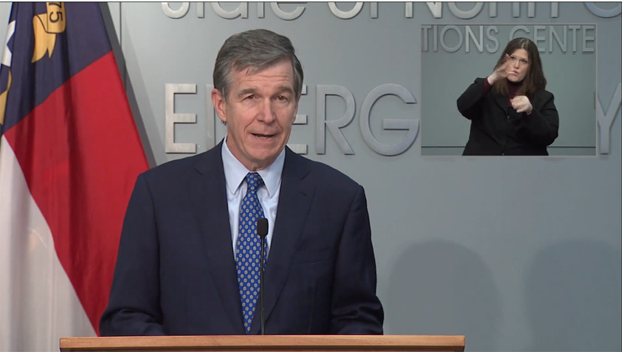 RALEIGH (AP) — North Carolinians will be allowed to assemble in larger groups and gather outdoors starting Friday without having to wear their masks.

Gov. Roy Cooper announced Wednesday afternoon that the state will soon lift the outdoor mask mandate and boost mass gathering limits to 100 people indoors and 200 people outdoors, which represents a doubling from the current levels.

The Democratic governor’s move comes as the U.S. Centers for Disease Control and Prevention says vaccinated Americans don’t need to cover their faces outside anymore unless they are in a big crowd of strangers. Under some circumstances, unvaccinated people don’t need to be masked outside, according to the CDC.

Cooper said masks will still be required indoors and he encouraged people to remain cautious.
“Masks will continue to be required indoors (and) in public places since this virus still can spread easily when we’re inside,” Cooper said. “Even though we’re continuing our dimmer switch approach of easing restrictions, we need to stay vigilant.”

Cooper plans to eliminate social distancing and mass gathering restrictions by June 1 and eliminate the mask mandate altogether once at least two-thirds of North Carolina adults are at least partially vaccinated.

Nearly half of adults in the state have gotten at least one COVID-19 shot and more than 39% are fully vaccinated, as of Tuesday, according to state health department data.

Mandy Cohen, the state’s top public health official, did not provide a date of when she expects North Carolina to hit the two-thirds vaccinated threshold.

“When will that happen, though, is up to North Carolinians and how quickly people get vaccinated,” Cohen said.
State health officials expect to receive more than 222,000 first doses of the Moderna and Pfizer vaccine. The state also had about 132,000 single-dose Johnson & Johnson vaccines available, as of this past weekend.

The pace of vaccinations has slowed recently, with supply outpacing demand in many parts of the state. On the week of April 5, providers administered more than 246,000 first doses. Fewer than 85,000 people got first doses last week, which is the lowest weekly count since the end of December 2020.

Cooper said easing the indoor mask mandate once two-thirds of adults are partially vaccinated is a “real incentive” for people to get vaccinated. He’s mulling other ideas and suggested there could be some additional partnerships with local organizations to boost participation.

Cohen said she’s noticed a slowing of people coming in for the vaccine. In response, the state is changing its approach to distribution away from mass vaccination sites in favor of a more widespread effort to get vaccines closer to peoples’ homes. Health officials are also continuing their strategy of waging an information campaign promoting a return to summer.

“Most folks not only here in North Carolina but around the country can access the vaccine within five miles of their home, and that’s really good news,” Cohen said. “We want folks to know there aren’t long lines, there isn’t a scramble to get appointments, there’s supply here in North Carolina, it’s easy for everyone to access and they’re completely free.”