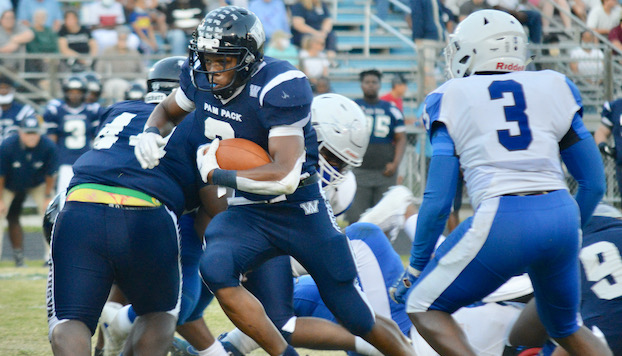 It will take a while for the sting of Friday’s 34-23 home loss to St. Pauls to subside, but once it does, the Pam Pack players and coaches will reflect on a successful, albeit odd, spring season.

Washington (7-2) won its second straight conference title and advanced to the East regional final for the first time since 2014, before coming up short against the Bulldogs.

The Pack started workouts in June to prepare for a season that was ultimately delayed until March by COVID-19. While some schools paused, perhaps anticipating that the season would be cancelled, the Pam Pack preservered through individual, small group, then team workouts on the field, all the while gaining strength in the weight room.

“I couldn’t be prouder of the effort that our guys and our assistant coaches put forth during very uncertain times,” first-year head coach Perry Owens said. “We did as much as we were allowed to on the field and really got after it in the weight room. Once we knew there was going to be a season, we thought we had a shot at something special.”

A 14-7 loss to D.H. Conley was the only blemish on Washington’s record until the end.

The Pack led 20-14 at halftime in their final game, but senior linebacker Walt Gerard re-injured his shoulder in the first half and couldn’t continue. The Bulldogs exploited his absence to take control in the final nine minutes.

“Give credit to St. Pauls for being a much better football team in person than they were on film,” Owens said. “They made two critical stops when they needed to and made enough plays to win the game. Having the best defender in the East on the sideline with me in the second half was really tough for us. I hate it for him and our other seniors, but after watching the film, I’m comfortable with it and will move on.”

Junior Terry Moore led the way with 1,472 rushing yards, while senior Jaden Hambric had 1,113. Both averaged over 10 yards a carry and each scored nine touchdowns.

“I’m very proud of what our seniors accomplished during their four years here,” Owens, the former offensive coordinator said. “We had to rebuild this program from 4-8 in 2017 and they were a big part of that process. With Hayes, Terry and several others coming back, we have some really cool things to build on. We’ll take a week off, then get back in the weight room with the guys who aren’t playing a spring sport.”