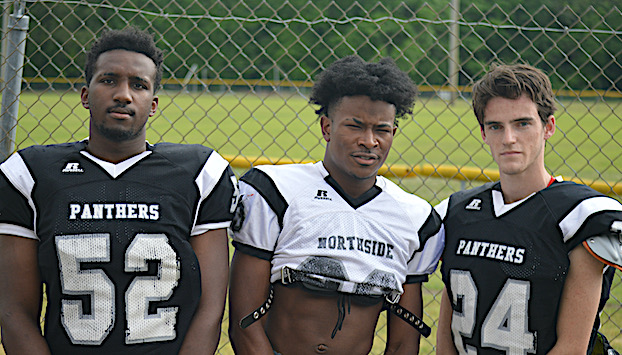 The Panthers kick off at noon Saturday against Murphy for the 1A state championship in Carter-Finley Stadium in Raleigh. Seniors Fred Taylor (52) James Gorham (23) and Tyler Modlin (24) answer five questions about their historic season.

Fred: For me, it’s about leaving something for future classes to remember us by. It’s about making a mark. It’s the best feeling ever.

James: Just the fact that Northside is going for the first time in over 20 years is really cool to me.

Tyler: I think it’s about our hard work paying off. The reward is what we’ve experienced this week.

Fred: It means everything. We are confident that we can play with any team in the state and we get a chance to prove it.

James: We’ve been chasing this opportunity our entire careers playing football. It’s gratifying that we are finally there.

Tyler: It’s a blessing to have the opportunity and we are really looking forward to it.

Fred: It will be really neat to be the ones being watched as opposed to the ones watching. We’ve all seen it on TV, so it will be fun to actually play there.

James: I’m really excited to play on a major college field. I think it’s going to be really cool to run out of the tunnel before the game.

Tyler: I was there when ECU beat State a few years ago. It’s a dream come true to actually play on that field.

Fred: Making history with our championship run and the connections we made with our teammates. We are a family.

James: I can’t pick one moment yet. I think we’ll all look back on it being a lot of fun.

Tyler: I’ll remember the Anchor Bowl win over Southside at home and other little moments on the field with my teammates.

Fred, James and Tyler: After the first loss to Pamlico County. We knew they were one of the best teams in the East and we thought we could beat them if we saw them again. We did in the second round, then played our best game against Northampton to get to the state finals. All season, people have told us we couldn’t get this far. Well, here we are.