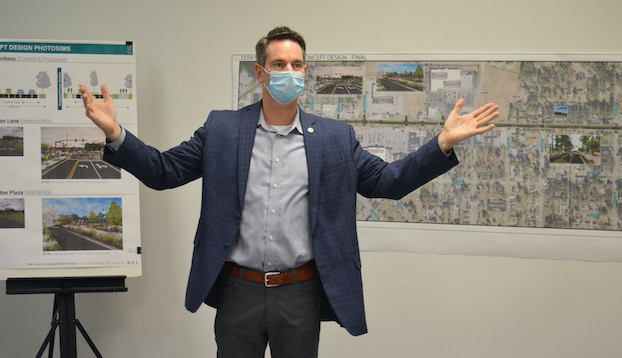 Stantec Engineering project manager Mike Rutkowski explains the final 15th Street design at Tuesday night’s meeting in Washington. The next step is for the City Council to review and approve the final design before it goes to the state Department of Transportation. (Steve Barnes/Washington Daily News)

It was the first chance citizens had to examine the plan in person after a series of virtual meetings that started earlier this year.

“We’ve tweaked it some since our last virtual meeting in March based on input from business owners along the corridor,” Rutkowski said. “They would like to see more right turn options so drivers can get into their businesses safely. The rest is basically what we previously presented.”

The main components of the 1.6 mile project are shrinking the road from four lanes, two in each direction, to two with pocket medians and dedicated left turn lanes, while adding sidewalks and bike paths along with a roundabout at the western edge where Brown and 12th Street intersect with 15th.

There will be crosswalks with updated traffic signals at the major intersections and an updated entryway on the eastern entrance crossing U.S. 17 Business/Carolina Avenue.

Tuesday was also the first time a project price tag was mentioned publicly.

“We should be able to do the entire redesign for $11-13 million,” Rutkowski said. “We think DOT will be on board because the first plan five years ago came in at $24 million. Staying within the current right of way (not expanding the road) is where the significant savings occurs.”

Along with more right turn options, Stantec also recommended building funding for additional roundabouts along the route into the project budget.

“People are skeptical, but single lane roundabouts help traffic flow much better and there’s tons of data to back that up,” Rutkowski said. “We’ve found them to be very effective in other projects we’ve done.”

The next step is for Stantec to put a full project report together to present to the City Council for approval at the July or August meeting. All five members and Mayor Donald Sadler were in attendance Tuesday.

“Something has to be done, that’s for sure, but I don’t think we spend a dime until we talk to the people along 15th Street,” councilman William Pitt said. “I want to know what the manager at Food Lion thinks. How safe will it be for his employees to get home?”

Pitt is a firefighter and advanced EMT and has been on the scene of both fatal wrecks along the corridor.

“I know it’s not safe currently,” he said. “We have to get projects off the table and moving. I’ll be more confident when we figure out the funding.”

The state DOT owns the road and is responsible for footing the bill. City and Stantec officials hope the lower cost and staying within the existing right of way will make the project more attractive, but know the approval process will take time.

“DOT’s timeline is different than ours, but we want to move as quickly as possible on our end,” City Manager Jonathan Russell said. “We would be very pleased if we are in the construction phase two years from now.”

Stantec’s roll will diminish as the design moves from the city level to the state, but Rutkowski is confident that DOT will sign off on what they’ve created.

“There is no silver bullet and there will never be total agreement, but change has to happen” he said. “We’ve addressed the two major concerns of safety and traffic flow, while enhancing the route for pedestrians and bicyclists. We think folks will be pleased with the final product.”