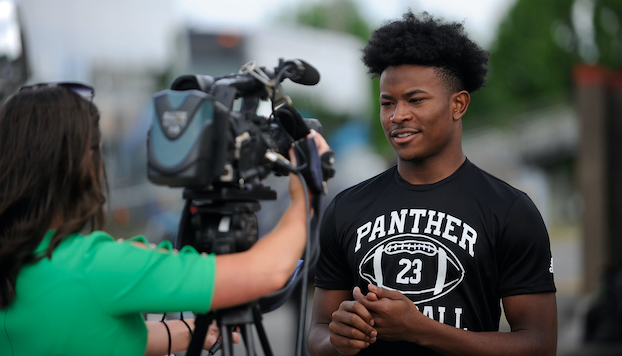 Northside senior James Gorham was one of 11 Beaufort County high school football players to earn All-State recognition. He ran for 1,618 yards and helped the Panthers to the 1A state championship game for only the second time in school history. (Ashley Vansant/Washington Daily News)

Northside senior James Gorham made the HighSchoolOT second team at running back. He ran for 1,618 yards and helped the Panthers to the 1A title game for the second time in school history.

Teammate Zion Wilson made the third team as a two-way player. The 6”4, 310 lb. offensive/defensive tackle had 39 tackles, 15 tackles for loss, three sacks and blocked a punt.

Pungo Christian Academy junior Fortino Beltran was named Honorable Mention for two-way players. He had over 1,000 rushing and receiving yards and 18 touchdowns, while making 67 tackles. The Raiders made it to the NCISAA 1A championship game in the fall.

Washington running back Terry Moore made Honorable Mention on offense with 1,472 rushing yards and 11 touchdowns as the Pam Pack advanced to the East final.

Moore made the Friday Nights in Carolina 2AA first team at running back while senior offensive lineman Ben Swinson was on the second team along with classmate Walt Gerard, who was named to a flex position.

Southside senior Davion Carter made the 1A second team at flex along with Northside receiver Tyler Modlin.

Panthers who made the 1A first team include Gorham, Wilson, seniors Fred Taylor (DL) and Sam Vansant (DB) along with sophomore kicker Chase Tomaini.

HighSchoolOT.com is the only outlet to name a team regardless of classification. There are 15 players on the first team on offensive and defense along with 10 players who play both, with the same number on the second and third teams. There are also five special team spots on the first, second and third teams and 22 players are named honorable mention.

Friday Nights in Carolina goes the more traditional route by naming a first and second team in each of the eight subdivided classes, i.e. 1A, 1AA, etc.