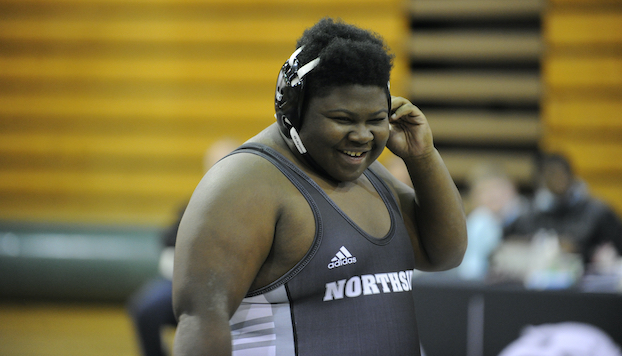 Keon Satterthwaite had never wrestled, but decided to try when NHS band teacher and former Washington High School wrestling assistant coach Daniel Garcia announced the Panthers would have a team. He shares experiences from the inaugural season.

Keon: Being part of something new and seeing Coach Garcia in a different role. I have him for band since I play the trumpet and baritone. It was weird at first because he is stricter as a coach and more fun as a teacher, but I’ve gotten used to it. I’ve also lost 30 pounds since practice started, which has been great.

Keon: I was excited when Mr. Clark, our former principal and Coach Garcia announced we were going to have a team, even though I’ve never wrestled. I thought it would be a good way to lose weight and more fun than just trying to stick to a diet.

Keon: I didn’t realize how hard it was to manage your body weight and get ready for the weigh-ins before matches. It’s been a complicated process for me, but I’ve learned to adjust my diet. It’s been fun and I plan on doing it again next year.

Keon: Batman because he runs the family business, drives a fancy car and saves the world all at the same time.

Keon: Having some time to relax, but also starting football workouts. I’ll be training on my own with (former Panther) Tyler Turner to get in better sha